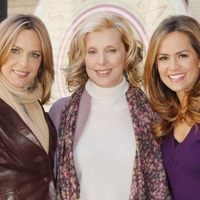 Last seen in July 2010, Wildman returns to Salem beginning Wednesday, March 9 for extended visit amidst the drama her daughters are going through. One daughter (Nicole) will have recently re-married EJ, while the other daughter (Taylor) is secretly in love with EJ, or is acting like she is. Of course, in typical soap opera fashion, Fay has a secret of her own which will put both daughter's and their issues to shame.

In addition to her numerous visits to "Days of our Lives," Wildman has also appeared in episodes of "General Hospital," "Beverly Hills, 90210" and "CSI: Crime Scene Investigation."