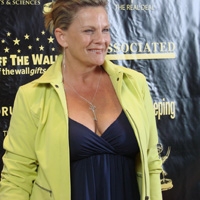 (SoapOperaNetwork.com) — Famous for her roles on "Guiding Light" and "One Life to Live," Kim Zimmer is joining the cast of the hit Off Broadway show "Love, Loss, and What I Wore" begining with the Wednesday, February 16 performance.

Zimmer, who currently portrays the role of Echo DiSavoy on "One Life," willl be joined by actors Katrina Bowden ("30 Rock"), Sabrina Le Beauf ("The Cosby Show"), Orfeh ("Legally Blonde"), and Barbara Rhoades ("The Goodbye Girls") in the play written by Nora Ephron and Delia Ephron, which is based on the best-selling book by Ilene Beckerman. The show comprises an intimate collection of stories from the book and on recollections of the Ephrons' friends. A key factor in the success of the production is the use of clothing and accessories and the memories they trigger in helping to tell some funny and poignant stories that all women can relate to.

The show opened in October 2009 and is performed by a rotating cast of five all-star actors, who perform in five-week cycles (Zimmer's last show will be on Sunday, March 20). Some famous names that have taken part in the show include Fran Drescher ("The Nanny"), Tichina Arnold ("Martin," "Everybody Hates Chris"), Nikki Blonsky ("Hairspray"), Alexis Bledel ("Gilmore Girls"), Tyne Daly ("Judging Amy"), Jane Lynch ("Glee"), Melissa Joan Hart ("Sabrina, The Teenage Witch," "Melissa & Joey"), Sherri Shepherd ("The View") and many, many more.

Tickets are $79 and can be purchased online via Telecharge.com or in-person at the Westside Theatre Box Office located at 407 W. 43rd Street in New York City (between 9th and 10th avenue). For more information, please visit www.lovelossonstage.com.