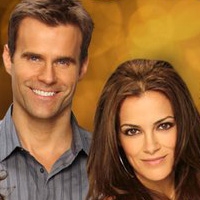 (SoapOperaNetwork.com) — Next week ABC's "Castle" begins filming a "One Life to Live" inspired episode entitled "One Life to Lose" in which a soap opera head writer is murdered on the set of the fictional soap opera "Temptation Lane," one of New York's longest running soap operas (ala "One Life to Live" itself). The soap themed nod to "One Life" hails from "Castle" himself, Nathan Fillion, who portrayed the role of Joey Buchanan on the ABC Daytime drama series from 1994 to 1997 and again for two episodes in 2007. "All My Children's" Rebecca Budig and Cameron Mathison are set to portray roles in the episode, one as a soap star and the other as a director.

Budig will portray Mandy Bronson, the young and gorgeous diva/lead actress on the soap opera, who is said to be very aware of her sexuality and uses it to her advantage any chance she gets. Meanwhile, Mathison is set to play the role of Vince Bowers, the devastated husband of head writer Sarah Cutler (actress unknown), the victim, and also a director on "Temptation Lane." Also appearing in the episode are actors Corbin Bernsen ("The Young and the Restless," "Psyche") and Jane Seymour ("Dr. Quinn, Medicine Woman"). Seymour will play Gloria Chambers, the grieving mother of the murder victim, and Bernsen will portray Lance Buchanan, a rugged, self-assured, veteran actor on "Temptation Lane," who has a romantic history with Castle's mother, Martha Rodgers (Susan Sullivan). Bernsen's characters last name "Buchanan" is sure to be one of the many hush, hush, wink, wink aspects throughout the episode.

Though TVLine.com, which originally broke the story on January 26, reported the episode as airing on Monday, March 21, an ABC representative informs Soap Opera Network that an airdate has not been set, though it will in fact air in March.