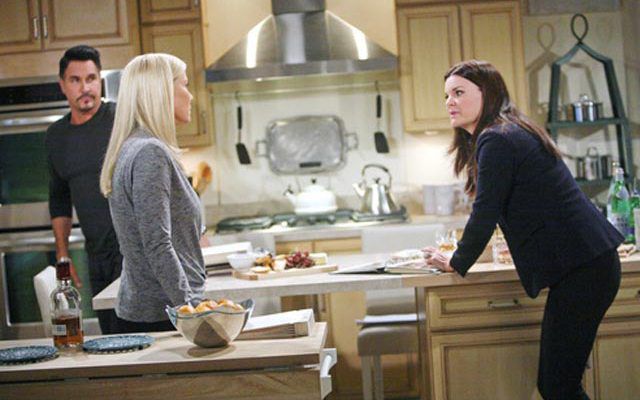 Not realizing they are being recorded by Markko’s video camera, Destiny confesses to Matthew that she saw Langston and Ford kissing on Monday, April 26. Danielle is affected while rehearsing some intense scenes for the play involving Todd. Later, Markko nearly discovers Langston and Ford but is distracted by Cole and Todd’s confrontation. Elsewhere in Llanview, Viki and Gigi get caught up on their lives. Bo encourages Rex to give Gigi another chance, while Viki tells Gigi that she and Rex should get back together again. Viki and Charlie are grateful for one another. Charlie talks Jessica into considering asking Brody to take her to the prom. When he surprises her with a romantic dinner, Layla thinks Cristian is about to pop the question on Thursday, April 29. After spotting them together, Jessica calls Brody. And Bo has some advice for Matthew.

The Inside Story: Guilty Until Proven Innocent

Hannah overhears Cole claim to Starr that Todd was the one who went after Marty on Monday, April 26. Starr and Cole don’t see eye-to-eye concerning Todd’s guilt. Afterward, Starr confronts her father, who assures her that he is not to blame for what happened. Meanwhile, John gives Brody some clothing fibers retrieved from the crime scene to be analyzed. Marty sends Natalie and Brody away after becoming emotional. On Tuesday, April 27, Téa and Blair agree that Todd is capable of just about anything. Starr tells her father that she believes him. Cole is surprised when Hannah claims to have witnessed Todd attacking Marty. Todd alleges to Cole that the girl is a liar. Cole physically attacks Todd in front of Starr, Téa, Blair, Danielle, and several others. Todd is taken to the hospital with Starr and Blair at his side on Wednesday, April 28. Nora promises Marty that she will throw the book at Todd. Téa is taken aback when Danielle wants to accompany her to the hospital. After learning the extent of his condition from Dr. Gangemi, Blair urges Todd to fight for his life, and sets vigil at his bedside. Starr informs Cole that Todd could die as a result of what he has done. John orders Brody to bring in Cole and Hannah. Natalie thinks an apology from John is in order. Blair, Tea, and Danielle watch in horror as Dr. Gangemi and his crew work to revive Todd after his heart stops beating. Hovering between life and death, Todd suffers a horrific nightmare on Thursday, April 29. Starr and Cole remain at odds when he offers no remorse for his actions. Brody arrests Cole, while John talks to Hannah, who maintains her story. Natalie doesn’t get her apology. Téa instinctively jumps to Todd’s defense on Friday, April 30. John is unmoved by Téa’s plea, and handcuffs Todd to his hospital bed. Todd again begs Starr to believe his claims of innocence. Blair warns Todd that he better not have caused Marty’s accident. Viki reaches out to Danielle, who remains conflicted over her mother’s decision to represent Todd. And Marty stands by her son after learning of his arrest.

A Closer Look: The Truth Is Out There

Kelly is desperate to contact John after finding Rodney dead in her office on Monday, April 26. After examining the body, John can find no visible signs of foul play, however he and Kelly conclude that whoever murdered Melinda likely silenced Rodney as well, and that a killer may be roaming the streets of Llanview. With two people dead, Dorian fears that Kelly may be the next target. Concerned for her niece’s safety, Dorian speaks with Shaun, hoping to re-hire him as a bodyguard on Friday, April 30. And a mysterious stranger arrives at La Boulie looking for Kelly.