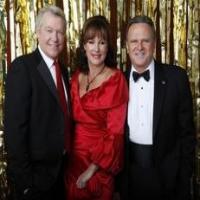 Todd finds that women can be rather difficult to deal with on Tuesday, August 4. Téa is ticked off at Blair. Todd makes a declaration of his love for one of the women in life. Blair continues to be jealous. Todd arranges a special surprise for his lady love on Wednesday, August 5. Cole works to convince Asher’s boss Serge that he wants to be a dealer, however, the drug king remains suspicious. John levels the playing field with the pill pushers. Cole’s mistake nearly blows his cover on Friday, August 7, however John manages to stop in at the last minute. John has words for Starr. Todd ponders what his almost son-in-law is up to. Greg is confident he has someone all figured out. Layla defends Fish to Cristian. Later however, Cristian gets an eyeful while watching frat buddies Kyle and Fish together at the diner on Thursday, August 6. Cristian gives Fish an ultimatum.

The Inside Story: Or Forever Hold Your Peace
Bo is faced with obstacles when he attempts to tell Clint the truth. The air is thick with tension as the ceremony begins. After imaging a rather bleak future for herself and Dorian, and becoming very intoxicated, the pair decide to crash Viki & Charlie and Clint & Nora’s double wedding on Monday, August 3. The ceremony comes to a close after the two Cramer girls publicly embarrass themselves. In the ensuing reception, two unlikely women catch the bridal bouquets. Bo and Nora dance around their feelings, literally and figuratively. Later, Nora has eyes for another while dancing with Clint on Wednesday, August 5. Viki and Charlie couldn’t be happier. On Friday, August 7, the Buchanans head to court with their hotshot new lawyer. Matthew provides Téa with some rather damaging information on his parents. Bo and Rex share another ‘father/son’ moment. Viki isn’t sure what to make of Charlie’s suggestion regarding their new family.

A Closer Look: Baby Blues
Stacy milks her pregnancy for all it’s worth. Schuyler must play the friend card while listening to Gigi’s never-ending problems with Rex. Gigi pays Stacy an unexpected visit after learning of her living arrangement on Monday, August 3. Rex tells Schuyler to stay away from the woman he claims to love. Gigi thinks she a permanent solution to the baby dilemma, but Stacy has other ideas on Tuesday, August 4. After Gigi tosses hurtful accusations toward her sluttly sister, Stacy is overwrought with pain. Rex is angry when Gigi confesses she asked Stacy to ‘get rid’ of the baby on Wednesday, August 5. Realizing they have a bumpy road to travel, Rex and Gigi make a pledge. After receiving horrible news, Stacy vows to keep it to herself. Rex makes things clear to Stacy regarding the baby and Gigi. Schuyler gives in to his feelings for Gigi on Thursday, August 6, only to apologize shortly thereafter.