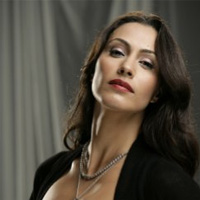 (SoapOperaNetwork.com) — Just as May Sweeps ends, daytime’s number one drama series, “The Young and the Restless,” gears up for the summer heat with explosive storylines and shocking returns.

Raul Guittierez (David Lago) is sticking around for a little while longer as “Y&R” delves further into Raul and Mac’s (Clementine Ford) time outside of Genoa City. It remains unclear how long Lago has signed on for.

Cassius Willis is back as Det. Gil Wallace, who shares words with Kevin Fisher (Greg Rikaart) on Monday, May 25.

Jerry Douglas  returns on Wednesday, May 27, as John Abbott takes time from his busy day in heaven to give son Jack Abbott (Peter Bergman) the “talk” of a lifetime. Douglas last appeared on May 5.

Corbin Bernsen, son of Jeanne Cooper (Katherine Chancellor) is back as Father Todd Williams. He re-appears in Genoa City on Tuesday, June 2 and learns that brother Paul (Doug Davidson) has popped the question to Nikki Newman (Melody Thomas Scott). Bernsen’s last appearance on “Y&R” aired in 2004.

On Friday, June 5, Raya Meddine brings Sabrina Newman back to “life.” Is Sabrina’s “ghost” haunting Ashley (Eileen Davidson) or is Adam (Chris Engen) playing another vile joke on step-mommy? Sabrina was killed in a shocking twist of fate as the spouses of Victor (Eric Braeden) and Nikki Newman (David Chow, played by Vincent Irizarry) died in a disastrous car accident in 2008.

Speaking of Adam, Engen has reportedly abruptly quit the soap after rumored battles with producers regarding the future of his character. His last airdate hasn’t been set, but Michael Muhney will take over the role beginning Thursday, June 25.