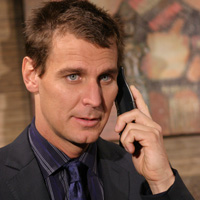 Carly finally comes to accept the fact that Michael won’t be waking up but later collapses in Jax’s arms after a fit of rage over the situation. Meanwhile, Lulu gets quite a surprise when she stops by Michael’s hospital room.

Jason tells Claudia he knows the truth about what she did. Sonny finds Jason and Claudia together.

Alexis remains convinced that Rebecca is up to no good. Tracy denies to Luke that she tampered with his and Ethan’s DNA test.