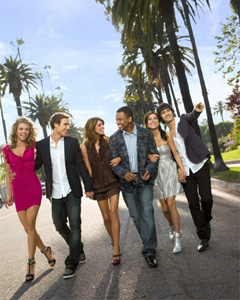 (SoapOperaNetwork.com) — On Tuesday, February 24, The CW Television Network gave the green light to show producers of six of its highest rated series to continue on with production during the 2009-2010 broadcast season.

The Hollywood Reporter is reporting that The CW has renewed dramas “Gossip Girl,” “One Tree Hill,” “90210,” “Smallville” and “Supernatural,” while adding two more cycles for reality hit “America’s Next Top Model.”

“As we continue to build The CW Network as a destination for young women, these six shows have clearly contributed to strengthening our schedule and our brand identity,” said Dawn Ostroff, President of Entertainment, The CW.

“One Tree Hill” enters its third season on the CW in the fall. This will be its seventh season overall. Chad Michael Murray (“House of Wax”), James Lafferty (“Once and Again”), Hilarie Burton (“The Secret Lives of Bees”), Bethany Joy Galeotti (“Guiding Light”) and Sophia Bush (“John Tucker Must Die”) star. The series currently airs Mondays at 9/8c.

“90210,” a spin-off of the popular 90’s drama “Beverly Hills, 90210,” will enter its second season on the network. The series stars Rob Estes (“Melrose Place”), Shenae Grimes (“Degrassi: The Next Generation”), Lori Loughlin (“Summerland”), and Jennie Garth reprising her role as Kelly Taylor from “Hills.” The series currently airs Tuesdays at 8/7c. It moves to Tuesdays at 9/8c beginning March 2.

It is understood that “Smallville’s” ninth season renewal came down to locking in star Tom Welling (“Cheaper by the Dozen”). Welling has been playing Clark Kent on the drama series since its debut on The WB in 2001. The series also stars Erica Durance (“The Butterfly Effect 2”) and Allison Mack (“The Ant Bully”). The series currently airs Thursdays at 8/7c.

Jensen Ackles (“Days of our Lives,” “My Bloody Valentine”) and Jared Padalecki (“Gilmore Girls,” “Friday the 13th”) fans can breathe easy knowing that the Winchester brothers will return for a fifth season of “Supernatural.” The series currently airs Thursdays at 9/8c.

Tyra Banks hosted “America’s Next Top Model” will present cycles 13 and 14 next season after debuting on UPN in 2003. The series currently airs Wednesdays at 8/7c.