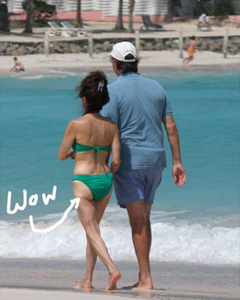 (SoapOperaNetwork.com) — You know you made it when…Perez Hilton talks about you!

That’s right, “All My Children’s” Susan Lucci (Erica Kane) was spotted by the paparazzi wearing a bikini while taking a stroll on the beaches of St. Bart’s with husband Helmut Huber. One not to pass up the chance to dog a celeb, Hilton surprisingly had nothing but praise for the actress:

Can you believe she is in her SIXTIES?!

We know twenty year olds would kill to have a butt like Miz Lucci’s.

What is your secret, S?

Lucci and Huber will celebrate their 40th wedding anniversary later this year. They have two children, Liza (ex-Gwen Hotchkiss, “Passions”) and Andreas.

The actress has been playing the dynamic diva Erica Kane on ABC’s “All My Children” since the series debut of the soap on January 5, 1970. Recently it was announced Lucci, and some of her other cast members, took a pay cut in order to continue her role on the drama series. The series was rumored to be facing cancellation due to low ratings and a poor advertising market.