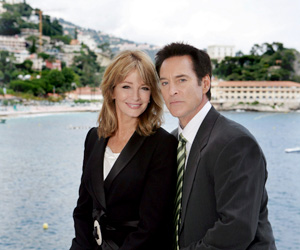 (SoapOperaNetwork.com) — After NBC slashed its budget and the show was forced to cut the fat, “Days of our Lives'” John and Marlena are set to ride off into the sunset.

With the economy a bust and falling ratings across the board at NBC and all of its dayparts, NBC shocked the daytime industry with news that not only has it renewed the 43-year-old “Days of our Lives,” but it did so with the intention of cutting the soaps budget by 40%. The network left it up to Executive Producer Ken Corday and his Corday Productions, in association with Sony Pictures Television, to decide how they were going to keep the show on the air at such a reduced price. Unfortunately, that decision was easy – cut the most expensive.

Deidre Hall and Drake Hogestyn are set to exit the NBC drama on Friday, January 23 as Dr. Marlena Evans and John Black say goodbye to their loved ones in Salem. With John’s memories failing him, it is anyone’s guess if all their happiness from the past will jog John’s memory and bring a brighter future for the super-couple.

“There is never an end when a couple leaves happily,” said Corday in a statement released to Soap Opera Digest in November. “They’re [John and Marlena] not dead. Characters have left and come back [before].”

Let’s hope Ken’s words hold true as we’ve learned that the duo will be left fighting for their survival just before making their [happy] exit.