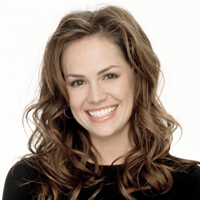 (SoapOperaNetwork.com) — Natalia Livingston may have left “General Hospital” in May as ghost Emily, but she’s ready to make her return to the ABC Daytime drama series as a new character.

Livingston, last seen as the ghost of Emily Bowen-Quartermaine on the Wednesday, May 7 broadcast of “GH” is returning in the “forseeable future” as a new character by the name of Rebecca, confirms an ABC representative. Though, we’ve since learned that Natalia makes her on-air return during the week of January 12. The actress began filming this week. No official character description was made available, but we can expect to see a new, blonder, Livingston playing a role quite the opposite of Emily, confirm sources.

The “FOX 11 Morning News” in Los Angeles, CA was given an exclusive first look at Livingston back in action while filming scenes with Tyler Christopher (Nikolas Cassadine) and Laura Wright (Carly Corinthos). Currently, Nikolas has been paired up with Nurse Nadine Crowell, a spunky character who seems to like toy ducks. No, seriously…she likes children’s toys because that is the type of personality she has. For those thinking more into it…

Interestingly, a number of recent scenes aired during “GH” have emphasized Livingston’s  presence. It appears we just didn’t know why.