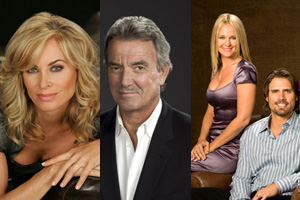 (SoapOperaNetwork.com) — While CBS’ “The Young and the Restless” turned 35 years-old in March 2008, its 20th Anniversary on French television is a time to really celebrate.

The show is heading to Paris, France in October to film on-location scenes for an upcoming storyline involving the likes of Nicholas Newman (Joshua Morrow), Sharon Abbott (Sharon Case), Ashley Abbott (Eileen Davidson) and Victor Newman (Eric Braeden). No other actors will be attending, according to a spokeswoman for Sony Pictures Television, producers of the soap. While specific storyline information won’t be available for a number of weeks, the first couple of scenes are expected to begin airing during the all important November Sweeps period in the US. This will be the first time the show has ever filmed in France.

Davidson’s inclusion is surprising as the actress and her character currently work for the worlds most watched daytime soap opera, “The Bold and the Beautiful.” Will Ashley finally find romance in the city of love?

The location shoot precedes the shows upcoming 20th anniversary on French TV Network TF1, which began airing “The Young and the Restless,” aka: “Les Feux de l’Amour” in France, on August 16, 1989. The series debuted March 26, 1973 on CBS.

On the Web: The Young and the Restless and Les Feux de l’Amour.

“The Young and the Restless” airs Weekdays on CBS. Anytime on CBS.com. Check local listings.