(SoapOperaNetwork.com) — “General Hospital: Night Shift” premiered on July 12, 2007 with an average of 1 million total viewers and just under 500,000 viewers in Women 18-49. The reach the soap had was beyond anyone’s expectations at SOAPnet and the Disney-ABC Television Group. So what does the head of the company’s daytime division think of the premiere? “Obviously thrilled. There is a mass idea there where you put all of these ‘GH’ viewers and say ‘let’s come up with something that is spun out of ‘GH’ and put it on SOAPnet.’ It seems like a pretty basic programming idea, but you still have to make a terrific show and hope that people will watch it — and Jill and Bob have done that.”

On Saturday, July 14, 2007, Soap Opera Network was given an opportunity to speak with Brian Frons, [President, Daytime, Disney-ABC Television Group], after the “General Hospital: Night Shift” press panel at SOAPnet’s portion of the Television Critics Association Press Tour. In this five minute interview, Mr. Frons speaks candidly about “Night Shift” and how the show’s success relates to “General Hospital” and what changes are in store for “The View.”

With the success of the “Night Shift,” could plans of re-airing the show on ABC be far away?

“Not right now; I think that is certainly something we will consider for the future, but right now we are giving it multiple airings on SOAPnet and we are trying to use it as something to really draw people to the channel who haven’t been watching.”

If there are no plans on airing the show on ABC, how will the network help promote the series?

“I think that what we really have been using ABC for is as a promotional platform. This past week we’ve had longer than usual trailer’s for ‘Night Shift’ and ‘GH’ that pushed people to SOAPnet.”

Any spin-off plans for “All My Children” or “One Life to Live?”

“No, it is something certainly we will take under consideration. However, with ‘GH’ it was sort of a natural kind of thing as Robin and Patrick are always getting into trouble in the middle of the hospital. It was easy enough to imagine them being punished in some way – it just seemed to be a very natural idea. For the other shows it would need to be something that would make sense, like the McBain murders [One Life to Live]. We’d need to have something that we felt was right for each of the shows and that we had the time and the money.

While watching “Night Shift” and knowing that Jason is currently involved in a murder case on “GH,” was it a last minute idea to add Steve Burton into the show?

“It was something that came up prior to us writing the show. What happened was Steve has wanted to direct and he thought it might be fun if he could direct an episode and show up and do something new. Actors love to do something new and so the idea was kinda funny as we don’t talk about it, because you know usually everyone Jason kills is a bad person and deserves to die. Here we have the Angel of Death floating around the hospital, which we will deal with in the last episode of the series.”

“Night Shift,” the second spin-off of ABC’s “General Hospital” (“Port Charles” being the first), is set in the ER of Port Charles’ General Hospital. The series centers on Doctor’s Patrick Drake (Jason Thompson) and Robin Scorpio (Kimberly McCullough), who were sent to the Night Shift after the two performed surgery on a patient who lacked proper medical insurance without consent from hospital board administrators. The storyline may have started on “GH” but is continuing on “Night Shift.” However, once the primetime soap hit the air any continuity the soap may have had initially with its mother-ship may be whipped away.

How will you deal with the continuity of both series as their storyline’s are sure to intermingle?

“One of the early decisions we had to make was whether or not we think it is the same time. Because the tape schedule of ‘Night Shift’ was going be so disbursed we didn’t know exactly when the show was going to air or where we’d be in August. We decided that they [the shows] would live in their own separate universes. The relationships are transferred; some of the people would be in ‘GH’ and refer to what’s happening in ‘Night Shift.’ As Jill [Farren Phelps] said at the panel, if there was a preemption everything would be knocked out anyway.”

Rosie O’Donnell left “The View” abruptly after contract negotiations and her battle with a co-host went too far. Are there any plans to help the talk-show keep its ratings inroads without the outspoken diva?

“We are going to have an announcement by the end of the month. Barbara [Walters] will make it.”

Any chance Sherri Sheppard (“Less Than Perfect”) could be part of the plan? 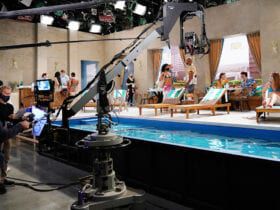 Filled with high octane drama, find out how Port Charles will be cooling things down this summer. Plus dozens of photos from the pool set that has everybody talking!