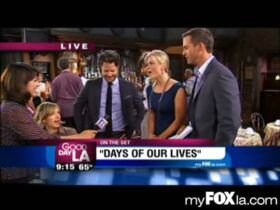 On Friday, July 29, talk show host Nate Berkus ("The Nate Berkus Show") was captured by "Good Day LA" cameras and reporter Gina Silva while he was on the set of "Days of our Lives" filming scenes for an upcoming appearance on the NBC soap. While production was halted for the live interview, viewers got their first glimpse at Sarah Brown with newly cut hair before she even debuts as Madison James on Tuesday, October 4.