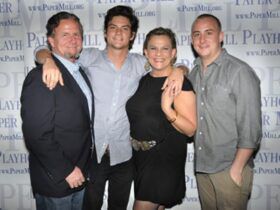 Keeping It All in the Family: Kim Zimmer’s Husband Joins Her in Llanview

When Rex (John-Paul Lavoisier) and Natalie (Melissa Archer) arrive in Kentucky at the Spotted Pony Strip Club later this week, fans may recognize the face of the man tending bar behind the counter. A.C. Weary, the husband of Kim Zimmer, who returned to the role of Echo Di Savoy last October after a nearly thirty year absence from the show, has been cast in the recurring role of Theo, the club's manager. But don't expect husband and wife to be sharing screen time anytime soon, however.