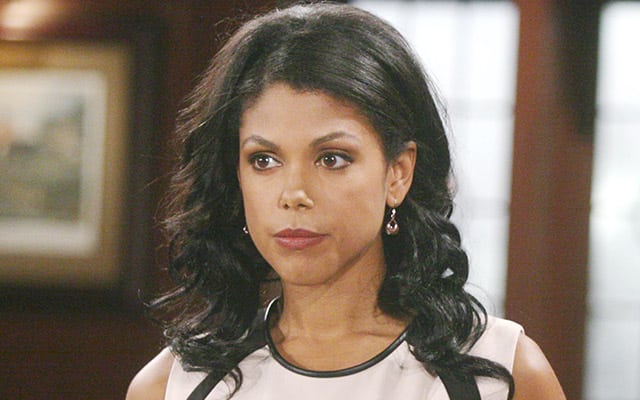 If a year ago someone bet me that a modern-day soap opera would not only put their African-American characters in a front burner storyline that was deeply entrenched in social issues, which had nothing to do with the color of one’s skin, race or ethnicity, I’d owe that person plenty of money right about now.

Following in the footsteps of Montana Moorehead (Cathy Moriarty) in 1991’s slapstick comedy “Soapdish,” where the character was later revealed to have been born Milton Moorehead, after proclaiming to the world that she had become pregnant after an encounter with another male character, Jeffrey (Kevin Kline), no soap opera has ever come close to telling a captivating tale of one’s transition from male to female. That is until CBS’ “The Bold and the Beautiful” did just that with the recent revelation that Maya Avant (Karla Mosley) was born with male genitalia and had previously gone by the name of Myron.

Yes, we’ve established that “All My Children,” “The City” and “Passions” had a transgender character on their canvas at a time or another in the past, but the impact either case had on their respective shows left no long-lasting effect. Things are different with “B&B.”

Maya is in love with the dashingly handsome Rick Forrester (Jacob Young), who she seemingly helped takeover Forrester Creations by always standing by his side and giving him the support he desperately needed, and never truly received, from his family nor wife, Caroline (Linsey Godfrey).

Despite everyone proclaiming she is nothing but a scheming gold digger who is after his money, Maya has shown that she does love the son of Brooke Logan (Katherine Kelly Lang) and Eric Forrester (John McCook) with all her heart and soul. She just can’t trust him with her biggest secret, at least not yet.

In today’s episode, a disgruntled Maya tells her blackmailing schemer of a little sister, Nicole (Reign Edwards), who is doing so as a result of her want to become a world-renowned fashion model, “I am proud of who I am,” but is she really?

“Being your true self takes a gift of extraordinary courage” is the tag for this week’s promo for the daytime drama series, which highlights Maya’s conversations with not just her sister, but also her former lover, Carter Walton (Lawrence Saint-Victor). In the promo, and specifically in today’s episode, Carter learns of Maya’s “true self” after overhearing a heated conversation between the two siblings. He begins to question everything he ever knew about Maya, including the elephant in the room – the daughter she supposedly gave up when she first hit Los Angeles, which viewers only learned about after Jesse Graves (Ricky Paull Goldin) hit the scene.

After telling Maya he doesn’t understand what he had just heard, Maya asks him, “Can you hear me with an open mind?” She then goes on to explain: “I never identified as a boy. My first clues were that I liked pretty dresses and mama’s heels. She said it was a phase that I would outgrow, and my dad… pretended it wasn’t happening. He wanted a boy, and by God, he got one. Except, I could never be that. I was different, but I didn’t know what made me different. One day, I was visiting a little girl – Valerie – down the street. She brought out her dolls and asked if I wanted to play. And I don’t know if it was her innocence or what, but… she saw me. She accepted me. And for the first time, I could be me without being ashamed or trying to hide. And eventually I realized that in my heart, in the core of my being, I am a woman. And I needed my outside to reflect that.” As for the daughter? “It was Jesse’s biological daughter, but I was her mother in every sense of the word.”

Devastated after hearing Maya’s confession as the pieces began to fall into place, an angry Carter yells, “You kept this from me the whole time? We were sleeping together! Did it occur to you that you should have told me that?!” Sadly for Carter it didn’t because, as previously stated, she felt in the core of her being that she was a woman in all the ways that matter. As for that pesky question of whether he would have stayed with her even if he did know the truth? “Who the hells knows? I never got to decide. How is that fair?” he asks.

While Maya and Carter are no longer intimately attached, it’s only a matter of time before her current lover, Rick, learns the truth himself. Whether it be this week, as alluded in the promo, or in the weeks and/or months ahead which is more likely, viewers will definitely be in for an exciting ride, especially when we’re left with Carter heading for the door as he tells Maya, “We know how Rick feels about secrets, and they don’t come bigger than this.” As he prepares to exit, Rick pushes the door open and asks, “What’s going on?” which prompts Carter to say, “You and I have a lot in common, dude… And you won’t believe what it is,” just as the screen fades to black.

Kudos to “The Bold and the Beautiful” for taking the daring step of telling this tale in a careful and well thought out direction, with input from GLAAD, the organization representing gays, lesbians, transgender and those questioning, and to Karla Mosley in particular for showing that when story and talent sync together, soaps can still be amazing to watch day in and day out.