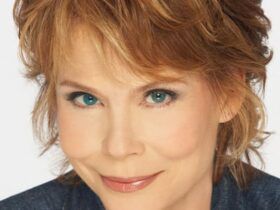 Longtime “All My Children” fans couldn’t believe it when news broke that Michael Nader would be bringing his popular alter ego, Dimitri Marick, back to the show. And even though it’s been over a month since his June 12 onscreen debut, it’s still a little bit hard to believe that he’s really back in Pine Valley — even for the actor himself! And it turns out, it was a return that nearly didn’t happen.

“I got a call from my daughter, who said, ‘Dad, I just got an email from someone named Ginger in regards to ‘All My Children.’ She wants to talk to you,” says the actor about how he and executive producer Ginger Smith got in contact. “And lo and behold, [Ginger] said, ‘I’d been trying to find you for three weeks, and I just told the writers that mostly likely I’m going to have to pull off of writing for you, because we couldn’t find you. You’ve been well hidden, Mr. Michael.’”

Fortunately, the writers were able to go full speed ahead once Nader’s return was cemented, and the resulting romantic story between the Hungarian and Julia Barr’s Brooke is one he’s found enjoyment in. “I like what they’re writing,” he says. “You’ll see Julia and I having a lot of fun together. Some of the writing becomes a little pedantic… and both of us are having so much fun kind of rattling that cage, making it more fun that its written. You know, to get away from some of those pitfalls of the emotionality of daytime. This gives a little more depth. Dimitri’s always been a hot flare, you know. And… we’re trying to just mix up some of those romantic inclinations with a bit more humor instead of trying to hit the [nail on the head] all the time.”

That being said, don’t expect Brooke to fall for the Hungarian’s charms any time soon! “Brooke is deeply dedicated to Adam,” Nader comments, adding that though the Chandler patriarch’s portrayer, David Canary, hasn’t been around much lately, he’s more than likely to play an important role in what happens between Brooke and Dimitri in the months to come. “[David] has retired somewhat from a daily appearance on the show, but I’m sure he’ll be brought in at poignant moments as we move forward with this balancing act.”

While that triangle plays out, Nader is happy to report that Dimitri is set to be tied into a multitude of stories over the summer and beyond. “From what Ginger has told me, things will start perking even outside of [Brooke] with other relationships that the audience right now doesn’t know about but will be informed [of] through Dimitri,” he teases. “She’s saying that in the next segment when I come back — I think it’s in the middle of August — we will be cranking up more of the backstory, and [we’ll be] starting to involve a bunch of the younger people, which I cannot reveal right now.”

Nader is looking forward to what’s ahead, but one thing that’s definitely missing storyline-wise is the presence of the legendary Erica Kane, played by Susan Lucci. The actress has gone on record saying she’s trying to work an “AMC” return into her schedule, and Nader hopes it happens. “If Susan decides to come back in whatever program she figures out, I’m sure there’ll be a lot of sparks between us,” he opines. “We were a pretty dynamic couple during the early years on the show — all of the Yugoslavian stuff, that great three-week shoot we had in Budapest, you know, the grandeur of the that love when there was still money enough to be made to create grandeur on daytime.”

However, if Lucci were to return, she and Nader would look very different together, considering the actor is now bald — a choice he says was actually inspired by Thorsten Kaye (Zach Slater)! “I came in and the first day was hair and makeup and clothing and such, and I kept being introduced to one good looking guy after another with these shockingly full heads of hair and beautiful acolyte features,” he recalls. “And then finally a guy named Thorsten Kaye came in, one of the actors I had never met… probably about the same age when I started 20-some years ago. And he came in, he was about 6’3, a full mane of Viking hair down to his shoulders. And I shook his hand and I said, ‘You have just made me make a decision.’ And… [Ginger] came down and I said, ‘Ginger, I want to shave my head.’ And she went, ‘What?’ I said, ‘Yes,’ I said, ‘I can’t compete. I’m thinning. I’ve got a sort of a bit of a comb up, you know?’ I said, ‘I still have hair on my head, but why compete? And since I’ve been gone so long, I’m going to do this sort of Zen thing and do the Bruce Willis ‘Fade Into the Night Look.’”

Shortly after, he realized he may have made a mistake! “I went home that first night and I looked at myself in the mirror and I went, ‘Oh my god, what have I done?’ and I was thinking of calling Ginger and saying, ‘I made a big mistake. I have to go home. I can’t do this,’” he says, adding that fortunately, the look grew on him. “I got used to it… and it definitely brings me back in a visually new light.”

Outside of that brief moment of regret, the entire return experience for Nader has been a good one. “I’ve enjoyed myself immensely. I’m the same ham I’ve always been, and I like what they’re writing,” he says. “I’ve kind of gotten a new respect for Ginger’s writing team. It’s a big job to balance the older actors with the younger ones, but she’s doing a hell of a job on incorporating history with the new reality of the younger cast group… and so it’s kind of a very wonderful reunion for me, and I’m very lucky and honored to have been able to come back and clean house, so to speak.”