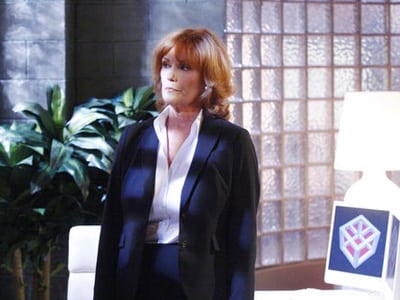 (SoapOperaNetwork.com) — You’ve likely heard of the big September returns like Erin Torpey, Andrea Evans and John Loprieno, but they aren’t the only familiar faces coming back to “One Life to Live” in the coming weeks. A few other minor, but noteworthy characters will also be making appearances as summer turns into fall.

Radio personality Carolina Bermudez turns up again as Llanview’s investigative reporter Blanca Morales on Thursday, September 1, when she looks for a scoop from a Llanview resident regarding a crime.

With the “Tale of Two Todd’s” storyline reaching a thrilling climax soon, you might have thought you saw the the last of Irene Manning (Barbara Rhoades), but you’d be wrong. Look for the mother with a warped sense of reality to try to make a deal with one of her sons on Monday, August 29. Rhoades made her “One Life” debut in the role on Tuesday, August 9.

The Buchanan/Evans drama continues into the month of September as Phylicia Evans (Tonye Patano) and Nora Buchanan (Hillary B. Smith) remain at odds.

Patrick Allen Cole taped scenes for his next appearance as Jeff (also know known as Adam), the Rodi’s bartender and manager on August 2, which will air sometime in September.

Brittany Angley will play a waitress on Thursday and Friday, September 1 and 2.

“One Life to Live” has released a new audition script for the role of “Reny,” which appears to be a minor part.

Did the woman in scenes with David (Tuc Watkins) playing his agent Bev Altman look familiar? That was actress Brooke Dillman (sporting a blonde wig), who is a childhood friend of Watkins and has appeared with him on HBO’s “Six Feet Under” and the 2009 online “Funny or Die” video “The Sentimentalist.” Dillman’s other credits include “Nip/Tuck, “The Office,” “Blue Collar TV,” “The Bill Engvall Show,” and “Good Luck Charlie,” as well as the film “Larry the Cable Guy: Health Inspector.”

Robin Strasser (Dorian) had a little medical crisis earlier this week. On August 15, the actress tweeted that she had been “Hospitalized Monday-blood infection-I can’t spell e coli, how’d I get it? 🙂 I’m home, gonna rest and be grateful. Sorry for disappearing.”

She may have already left the show, but Nafessa Williams (ex-Deanna) posted this picture of herself and how excited she was the day she landed her “OLTL” role.

It has been rumored that an update to the opening is in the works and that a few actors, including Andrew Trischitta (Jack) and Ted King (Tomas) have taped new shots for it.

In case you missed it, get ready for some more Starr (Kristen Alderson) in the coming weeks. On August 1, Alderson tweeted that “Why does Starr have to be a medical wiz all of a sudden? lol I’ve had so many tough lines to say lately!!” She later added that “I have a late call into work tomorrow.. Can you say SLEEPING IN!? I can. Haha,” and “Seriously Starr…quit saying words like this,” along with this close-up of a big medical term from her script. Later she said “Successful day at work! yay! I had lots of lines but it all went very well. Lots of Starr stuff coming up for ya ; ).  Lovely day in Llanview.” She also thanked fans for liking her scenes with Roger Howarth (Todd), tweeting “Thanks for all of the positive feedback on my scenes with Roger that aired today. They were surreal to film.”

“OLTL” Music Director Paul S. Glass tweeted this picture of Alderson in the studio recently recording a single with co-star Barret Helms (Baz). And  check out this funny one of her dog Pooka at the recording session.

And Kassie DePaiva (Blair) commented earlier this month that “I’m glad so many of you caught today’s show!!! Awesome huh? I loved it too… It’s great to have Roger back. We watched in the makeup room.”