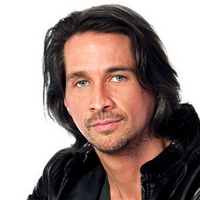 John examines evidence left in the man with Todd’s original face’s room, including Kent’s ID and phone, as well as a computer, complete with its search history indicating an interest in Todd Manning.

John locates Sam in another Minute Man room with Dorian and Echo. John returns with Sam, providing the family with a happy reunion. John informs the Mannings that Sam claims the man behind super hero mask is the man with the line on his face.

Natalie enters and brings David and Viki up to speed on the situation with missing Sam. Her update is interrupted by Dorian’s arrival. She tells David and Viki of her kidnapping by Echo and subsequent rescue. David and Dorian clear the air and renew their love. Later, Natalie divulges to Viki the oddity surrounding the identity of Sam’s no-longer imaginary friend.

Joey shows up at La Boulaie on a pretense; his true mission is to spend time with Kelly.