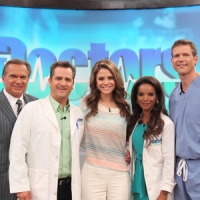 (SoapOperaNetwork.com) — CBS Television Distribution's daily strip of medical series/talk show "The Doctors" has given soap opera fan Lisette Davila the ultimate makeover just in time for next months Daytime Emmy Awards set to be broadcast on CBS on Sunday, June 19.

In the episode airing Thursday, May 19, television personality Maria Menounos joins 'Doctors' co-hosts Dr. Andrew Ordon, Dr. Jim Sears, Dr. Lisa Masterson and Dr. Travis Stork as they talk with her about how she keeps in shape without going to the extreme. Afterward, Menounos goes one step further when she gives Davila, who is a "Days of our Lives" fan the surprise of a lifetime – a glamour red carpet makeover from the inside out!

38 year-old mother, Lisette Davila, is a huge daytime television fan. She became hooked on Days of Our Lives when she was ten-years old and had to stay home sick from school. Lisette also never misses an episode of The Doctors. The daytime television lover says that “daytime TV is an escape…The Doctors teaches me how to stay healthy and look better. And, the soap stars have beauty…and glamour!”

For Lisette, the past few years have been anything but glamorous. She moved her family to Las Vegas for a big promotion, due to the stressed economy, was laid off. Around the same time, Lisette, had a hysterectomy procedure, and, as a result, her hair started to fall out and thin. She could see her scalp in photographs and it took away all of her self esteem.

After hearing this, The Doctors and red carpet correspondent, Maria Menounos, felt that Lisette was in dire need of a self esteem boost. They gave her a red carpet makeover including a new gown and restorative hair procedure from Hair Club. And, to top it all off, Lisette was given to tickets to the 38th Annual Daytime Emmys in Las Vegas on June 19th.

Lisette will be attending the awards with her husband, Hector, and will be documenting her experience via FlipCam.