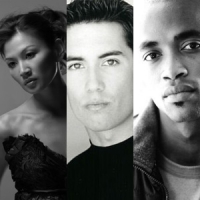 (SoapOperaNetwork.com) — As summer begins to heat up in Port Charles, ABC's "General Hospital" has cast a number of recurring characters. One is dangerous, another is slick and cocky and the last is an Asian attorney.

Beginning Friday, June 24, actor Kurt Caceres joins the cast in the recurring role of Javier. The character is described as a shady, dangerous and charming man.

Caceres appeared in the 2006 film "World Trade Center" as a Fireman. The film starred Nicholas Cage. Caceres' television credits include roles in such dramas as "American Family" and "Threat Matrix." More recently he appeared in an episode of "Criminal Minds," "Lie to Me" and "Dollhouse." He appeared as Mateo Santos Sr. on "All My Children" in 2002 as a temporary replacement.

DaJuan Johnson begins airing Wednesday, June 29 in the recurring role of Asher Caldwell. Described as slick, cocky and smarmy, Mr. Caldwell is an Armani clad guy who will do anything to make it in the business world. The question is, what type of business is he dealing in? Johnson had a recurring role on ABC's "Private Practice" until 2009.

Michelle Krusiec hits Port Charles as power attorney Grace Yang. The role is recurring. Before hitting "GH," the actress appeared in such films as "What Happens in Vegas" with Ashton Kutcher and Cameron Diaz and "Sweet Home Alabama," which starred Patrick Dempsey and Reese Whitherspoon. Krusiec currently recurs on ABC Family's "The Secret Life of the American Teenager" in the role of Emily. Her first airdate on "GH" is scheduled for Wednesday, July 6.