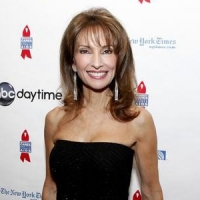 (SoapOperaNetwork.com) — This morning on ABC's "Good Morning America," actress Susan Lucci was interviewed by co-host Robin Roberts in promotion of her new autobiography "All My Life." The two discussed everything from her love life, her personal highs and personal lows, the coveted Emmy win and those pesky cancellation rumors currently surrounding "All My Children."

In "All My Life," Roberts noted that Lucci talks about her childhood and being shy, and how she helped organize her neighborhood, but when did she know she wanted to be an actress? "Oh, I can't remember when I didn't want to be an actress," said the 64-year old Lucci. " It's how it played. I'd make up stories and act out all the parts and when I finally got my nerve to go outside, the other kids did that with me." Did you know that when Lucci was 19-years old she was in a near fatal car accident? "I almost lost my eye. I was going to Manhattan on the Long Island Expressway on a Saturday night and I went through a windshield. My boyfriend at the time was driving and we stopped short and I went through the windshield. I actually wound up on the emergency operating table for 4 1/2 hours while the resident on duty that night carefully took glass out from right here," Lucci said referring to a place right above her right eye. "I still have a scar there, but that's all. I got so lucky." Obviously very lucky, Lucci also mentioned that her nose was broken as a result of the accident.

Lucci is famously known for her fashion do's and don'ts on ABC's "All My Children" as the diva Erica Kane, so it was not a surprise to know that before "All My Children" debuted in 1970 that Lucci herself could make a fashion disaster into a fashion triumph as the actress shared an interesting story with Roberts while on a date with husband Helmut Huber. "1969, I think it was…my husband really knew New York City very well and he was wining and dining me and taking me to wonderful places and we went to one place early on in our dating and I had on a red pants suit at the time, a tunic top, which was what was in style. We went to be seated and the matradee said 'oh no, no…you are not allowed in here with pants. We don't allow pants. We have a dress code.' I remember saying to my husband 'I'll be right back,' and I went into the ladies room and I took off the pants. I had a little mini dress on and voila, we got to sit down," said a laughing Lucci. Joking along, Roberts noted that it was very Erica Kaneish of her. "[laughing] It was before Erica Kane…there was a reason I played that part," Lucci said.

In January 2010, "All My Children" was moved from its home in New York City to new digs in Los Angeles. Lucci, the only remaining original cast member still starring on the soap, was asked to renegotiate her contract in order to keep the soap on the air and in good financial standing with its network. Last week, rumors of the soaps cancellation hit the world wide web courtesy of a report on Deadline.com. The news was later picked up by news magazines, print media and gossip sites (ie. the mainstream press). Asked what the future holds for the soap and soaps in general, Lucci said "as long as we have these loyal, passionate fans in our corner, including Oprah [Winfrey] who had us on just a few weeks ago for her final season and said she only wants people on who she wants to talk to, is a great vote of confidence." Although recent rumors of "AMC's" demise was not directly addressed by either Roberts or Lucci, the actress said "the fact that the network moved us from New York to our brand new digs in LA was a big financial vote of confidence. We just received a letter from the Vice President of Finance, congratulating us on what great shape we're in."

Before Lucci's interview with Robert's took place, the morning show showed a segment where "GMA" correspondent Juju Chang visited Lucci in and around her Long Island home. The two discussed shoes and accessories (Chanel and Gucci), family, her famous Erica Kane slap and where she keeps her Emmy. "A lot of people ask me where I keep the Emmy, and I tell them 'on the mantle in the living room, center stage,'" Lucci shared. Told that she needs another spotlight on it by Chang, the actress joked "or another one next to it."

Lucci was nominated for a record 21 times for her role as Erica Kane in the category of Outstanding Lead Actress. She finally won the award in 1999 when Shemar Moore (ex-Malcolm Winters, "The Young and the Restless") proudly declared "the streak is over…Susan Lucci!" Moore's announcement sent chills throughout the daytime community as Lucci finally walked on stage to receive her first Emmy Award from the National Association of Television Arts & Sciences. What was it like for Lucci to finally hear her name called after so many nominations? "It meant a great deal," Lucci said. "I always said the nominations meant so much to me, and they do, and Juju can tell you they are all framed in my home, but having said that, winning is better. Really what meant so much to me, I'll never forget, was when I finally went up on stage and turned around and saw my peers in the industry standing up and being happy for me. My goodness, they worked so hard and are so talented. The fact that they did that for me, I was blown away."

Family is one of the most important things to Susan Lucci. While walking around Lucci's home in the taped segment with Chang, the actress stopped in front of a painting of her children in their child form. "If the house was burning down and I had to take one thing, this would be what I would take," Lucci said. Lucci  a grandmother in December 2006 when her daughter Liza Huber (ex-Gwen Hotchkiss , "Passions") gave birth to her first child with husband Alexander Hesterberg III. Now 4-years old, Royce Alexander and little brother Brendan, 2, welcomed their newest sibling Hayden Victoria to the world last week. In an interview with InTouch Weekly, Lucci revealed that "Victoria is our family name – both Liza and myself have the same middle name – and we are so happy that she is carrying on the tradtion." As a congratulations, Roberts gave the actress a present from the "GMA" staff that said "if you think I'm cute, you should see my grandma."

Lucci will be featured on tonight's edition of ABC's "Nightline." Photos and memories of Lucci's life are currently available on ABCNews.com.