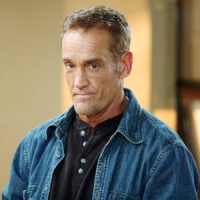 (SoapOperaNetwork.com) — After dragging out the storyline for nearly four months, "One Life to Live" is finally ready to reveal the identity of the person who murdered Eddie Ford. As we previously reported, John Wesley Shipp is heading back to Llanview as the recently deceased Ford brothers abusive father. While his return is expected to be brief, the actor tells Soap Opera Network that "you can bet it's going to be DRAMATIC!" In the coming weeks Shipp will appear in several flashback scenes as the murder mystery finally begins to unravel.

With Clint Buchanan (Jerry verDorn) arrested for Eddie's murder this week, little brother and Police Commissioner Bo Buchanan (Robert S. Woods) and Llanview P.D. appear to be to declare the crime "case closed." However, while the evidence against the Buchanan family patriarch appears solid, a series of cryptic riddles and some finger pointing from the prime suspect himself begins to plant seeds of doubts in the minds of some concerning his guilt. At the same time, fans continue to speculate that perhaps either Clint's sister-in-law Nora (Hillary B. Smith) or his nephew Matthew (Eddie Alderson) could be the true culprit.

Further blurring the line between Clint's guilt and innocence are comments from two of the actors themselves. Shipp tells fans on his Facebook page that "man oh MAN y'all are missing obvious (if you think about it) suspects…and/or outcomes." Meanwhile, Smith tweeted earlier this week that she was "Heading to work today after a lovely weekend of precious sleep. Sad stuff coming up! But I get to work with my Matthew and Bo!!!"

But what about Eddie's ex-wife Inez (Jessica Leccia)?  Is she still considered a suspect? Judging by Smith's comments, it appears she may be somewhat of a non-factor in the upcoming reveal. "I truly miss Jessica Leccia. We had some good giggles. I miss Jessica, but if Inez comes near my man…. OOOOOOOoooooooo."

No first airdate has been confirmed by the show, and Shipp admits that even he isn't exactly sure when his scenes will air, saying "I was told [April] 7th (not likely) the 5th, straddling the first weekend in April the 1st-and-4th option (which dramatically makes more sense. Also, around the 26th I will be in newly created 'flashback' scenes to the Dayton Chop Shop."

So who really murdered Eddie? Tune in to find out! In the meantime, sound off with your thoughts.