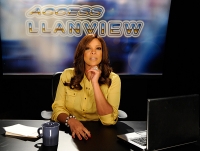 (SoapOperaNetwork.com) — With one episode down and another coming up on Monday, March 28, talk show diva and “Dancing with the Stars” sensation Wendy Williams will soon be making yet another appearance on “One Life to Live” as “Access Llanview’s” gossipy emcee Phyllis Rose.

Dishing out the latest dirt on one of Llanview’s most powerful families for her expose on “The Buchanans: A Family Under Siege,” Williams’ alter ego has gained quite the following among the citizens of the fictional Pennsylvania hamlet. On Friday, April 15, look for several Llanview residents to be glued to their television sets while “Access Llanview” is on the tube, including Nigel (Peter Bartlett) and Rama (Shenaz Treasuryvala), who find that they have at least one thing in common — their mutual obsession with the show and its flamboyant host.

The episode will be the third of five she has taped for “One Life to Live.” Airdates for the remaining two episodes have yet to be announced.  In case you missed her “One Life” debut back on March 2, you can watch it here.

In the meantime, watch Williams on “Dancing with the Stars” Monday nights at 8:00 pm ET on ABC, and weekdays on “The Wendy Williams Show.”  Check your local listings for the time and channel in your area.