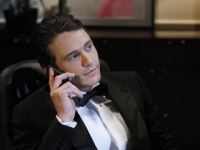 (SoapOperaNetwork.com) — If appearing on ABC's "General Hospital" and co-hosting the Academy Awards wasn't enough, you can now add Professor James Franco to the entertainers list of accomplishments. Franco received his MFA in film production last May after his hard work at New York University, and has now been given the opportunity to teach a third-year course on directing at the universities Tisch School of the Arts.

"He's here to teach because he really knows something about directing that he can share with our students," said John Tintori, chair of the graduate film program in a statement released to the New York Post on Tuesday. "He's incredibly prolific, and that comes from a real work ethic – and that's another thing to impart to our students."

According to the Post, current and prospective students have mixed feelings on whether Franco's high profile in the entertainment world may hinder him in his teaching abilities. "We choose [courses] because of the films we want to make, so somebody who wants to strengthen how they work with actors would work with James," said film student Heather Fink. "I think using celebrities is great. We want successful people who know about the business." Meanwhile, incoming student Ashley Lawwill has a different opinion on the matter. "I find it absolutely ridiculous and silly to sign up just because he's James Franco," the 24-year-old said. "I imagine in the first year, it'll be a lot of people just there for the name, [but] I don't want to go and learn what I can learn from Us Weekly."

The program is scheduled to last for three years and house a maximum of 12 students who annually pay a tuition of $46,000. The course calls for students to adapt poetry into short films.

Franco joined the cast of "General Hospital" in the fall of 2009 as the devilish Franco (how quaint a name). He most recently appeared in the Friday, March 25 episode when Franco delivered a message to Carly Jacks (Laura Wright).