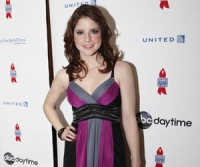 (SoapOperaNetwork.com) — Brittany Underwood, 22, joined the cast of "One Life to Live" on May 17, 2006 in the role of Langston Wilde. Nearly five years later, the actress is set to make her final appearance on the soap on Friday, April 8 when her character is offered a movie deal. In an interview with Soap Opera Network after last Sunday's grand finale of "ABC Daytime Salutes Broadway Cares/Equity Fights AIDS" charity event, Underwood dishes on what her fans mean to her, life after "One Life to Live" and the friendships she's created during her time on the ABC soap.

Underwood's "One Life" exit is said to tie in with the upcoming return of Jason Tam, who portrayed Underwood's on screen love interest Markko Rivera until last fall when his character moved to Los Angeles. While the news of his return came out after this interview took place, the actress made it clear that despite her leaving the show, she remains friends with all of her former co-stars. "I love Jason Tam, he's a great friend of mine – Brandon [Buddy, ex-Cole Thornhart] as well," Underwood said. "I'm going to stay in contact with Kristen Alderson [Starr Manning]. She was my best friend since the beginning and she'll still be my best friend until the end. We have our group of friends and we're a very good tight group of friends"

As all soap actors past and present have come to realize, soap opera fans are some of the most dedicated and passionate fans that any individual could ever expect to see. So what would Underwood like to say to her fans just before she makes her last appearance on the show? "I would like to say thank you for all the love and support that they have shown me throughout the years. We can't do without the fans and they are so amazing and so supportive," said Underwood. "No where else do you see fans so dedicated to to any genre. Just the fact that they are always willing to be there for you and so supportive is just so amazing. So thank you to them. I hope to see them in the future sometime."

Before she goes, Underwood took a moment to reveal what kind of storyline she would have liked to see her character play out. "Cole went through so much on the show, especially with the whole drugs storyline and the steroids. I really felt that when my character came on, because they had her so edgy, I really thought she was going to go somewhere with alcohol abuse or drug abuse," Underwood shared. "I think that would have been cool to see Langston go through that especially with her whole abandonment issues and just everything she had to deal with in her life. That would have been a cool thing to explore."