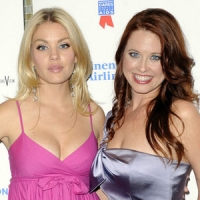 (SoapOperaNetwork.com) — “One Life to Live’s” Buchanan girls Bree Williamson (Jessica/Tess/Bess) and Melissa Archer (Natalie) are scheduled to be guests on Wendy Williams’ show on Tuesday, March 22.  The episode will be headlined by R&B Musician Bobby Brown and will also feature a segment with Williams discussing her “Dancing with the Stars” debut.  On Monday, March 28, the talk show diva makes her second appearance on “One Life” as “Access Llanview” host Phyllis Rose.

Williams made her “OLTL” debut on Wednesday, March 2 as part of a storyline referred to as “The Buchanans, A Family Under Siege.” She is scheduled to appear in three additional episodes of the soap sometime later this spring.

“The Wendy Williams Shows” airs weekdays in syndication, and weeknights at midnight ET on BET.  Check your local listings for the time and channel in your area.  You can also catch Williams on “Dancing with the Stars” Monday nights at 8:00 pm ET on ABC.