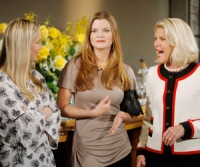 Thomas assured the press that Taboo is here to stay and on the move as Ridge, Stephanie, and Taylor looked on in shock. Reporters bombarded Brooke with questions about the line but she wasn't sure what to say. Another reporter asked Thomas and Brooke if their campaign was to scandalous. Thomas and Brooke made a joke out of it. Katie asked Brooke if she and Ridge were proud of Thomas. Brooke replied with a yes. Jarrett (the reporter) then asked Thomas how he really felt about Brooke. Thomas replied comically by saying, "A seven, maybe an eight." Everyone in the crowd laughed. Thomas made one last announcement, announcing that a portion of each Taboo sale would be donated to homeless people worldwide. "Yes my friends, Taboo is here to stay. We will make a difference and the house of Forrester Creations will rise to new levels." After the conference, Ridge ordered Thomas to come to his office with him.

Pam asked Donna how her honeymoon was. Donna told her it was lovely. Before walking away, Pam joked and asked her if she brought an extra suitcase with honey bear bottles for Justin, much to Donna's annoyance. Katie sensed a weird vibe in the room. Donna noted that she felt something was up as well. Katie wondered what Stephanie and Taylor were talking about across the room. Eric approached Donna and Katie before they left and told Donna how nice it was to see her so happy.

Stephanie told Brooke that she was stunned by Thomas's defiance. She wondered if Brooke convinced Thomas to hold the press conference. Taylor surprisingly didn't blame Brooke for this and said she believed Thomas orchestrated this by himself. Stephanie told Taylor that she thinks Brooke and Ridge's marriage is over because of this.

While walking in a hurry, Madison dropped the memo copy saying the Taboo line was canceled. Later, Jarrett found it.

Ridge was infuriated with Thomas and Brooke. He asked Brooke how she could do this. Thomas told him that Brooke had nothing to do with it, he explained that she thought he was announcing the end of Taboo. Ridge was still very upset and said he wanted to protect the family and that the only way to do that would be to stop Taboo. Thomas said that in his opinion everyone is overreacting about the kiss. He told his father once again that he was not in love with his wife and begged him not to take away his first big success. Ridge told Thomas that he doesn't give orders around here. Brooke stepped into the conversation and told Ridge that he would've done the exact same thing at his age. Thomas declared that he's not going to let go of the line and said that he's only doing what Ridge would've done at his age. "Everything I know, everything I've done, I learned it from you."

Later, Dayzee came to see Thomas in his office. She said she came because Stephanie told her he might need a friend right now. With Dayzee sitting in his lap, Thomas told her that he had a good day going up against his father. He recited the whole story about the kiss being revealed to his family. Dayzee sympathized with Ridge and said she could understand why he would be so upset about the kiss. Thomas defended himself. He then told Dayzee about how he intercepted his fathers memo and announced to the press that he's going forward with the line. Dayzee was impressed when Thomas told her about his new plan to donate proceeds to the homeless. Thomas told her that he learned this from her and that he's a better man because of it. He told her that the world was a better place because of her, and then they kissed.

Brooke tried to calm Ridge down. He told her he could not understand why she didn't call off the conference. Brooke told him that the company needs Taboo and that he should have never canceled it. She then added that she's going to continue promoting the line. She hoped Ridge would not walk away from her because of it.