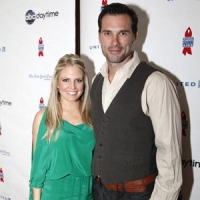 Copy/Paste not allowed. Link only.

(SoapOperaNetwork.com) — Austin Peck and Terri Conn recently joined the cast of "One Life to Live." Conn in the winter and Peck in today's episode. Before getting hired on at the ABC soap, the two veteran soap stars starred on CBS' "As The World Turns" as on screen husband and wife Brad Snyder (Peck) and Katie Peretti-Snyder (Conn). In an interview with Soap Opera Network conducted at the after party for ABC Daytime Salutes Broadway Cares/Equity Fights AIDS earlier this month, the two talk about the differences of working on "World Turns" to that of "One Life" and delve into their new characters' backgrounds.

While "As The World Turns" ended its run in September 2010, actress Terri Conn quickly nabbed the role of Aubrey Wentworth, the conniving wife of Joey Buchanan (Tom Degnan), who is the new bad girl in Llanview. Meanwhile, not much was known at the time of Austin Peck's new character, Rick, other than his storyline was a mystery. Before we get into their stories on "One Life to Live," we thought we would start things off with the question of what sets their new soap apart from their old one. "Same zoo, different animal," Peck said getting straight to the point. Conn elaborated on that by saying, "It's nice because most of it is so familiar. We have all kind of known each other from just this little world of ours. It is familiar in that way, but there are little differences. It's just getting to know a new group of people and the different ways that we work. They ['OLTL' and 'ATWT'] are both fast. I would definitely say there are different vibes, but it's been pretty similar and everyone's so cool and very appreciative to be where they are. It's just a nice work environment."

While they played husband and wife on "As The World Turns" and have oodles of chemistry on and off screen, does the two now working again on the same show mean that fans will get the chance of seeing their characters in scenes together? "Not yet," said Conn. "Not right now, I mean I don't know if there is any plans for it," Peck said. "Maybe in the future, because you don't know what is gonna happen, but right now I'm involved with a new character, Deanna, played by Nafeesa Williams. I'm excited, It is definitely very different from anything anybody has seen me do," Peck said of his character Rick. While at the time no one knew the specifics behind his characters dealings in Llanview, when it was announced in January that the actor would be joining "One Life to Live," it was recently revealed on today's episode that Rick was a porn producer, but that was not the role many had pegged him to play. "People think you're going to be a gay character," Conn told Peck. "Really? That would be cool," he replied. Of course, we can can now cross that off the list. "Yeah, cross that off the list," said Conn. "Well, you never know," she continued. "You never know," Peck echoed.

On the topic of Aubrey and her dealings with the Buchanan clan, Conn enthusiastically shared that "Aubrey has gotten herself into a bit of a pickle, because I think she really likes Llanview and she really is in love with Joey and that wasn't her intention." Of course, being a soap, a bad girl always has to have a trick or two up her sleeve, not to mention a boy or two on the side. So what about Aubrey's dealings with Cutter (Josh Kelly), who is now having an affair with Dorian (Robin Strasser)? "He's gonna make his rounds," said Conn. But does that mean Cutter is becoming the town whore? "Yeah, basically," the actress laughed.

Check back soon for an interview with Tom Degnan and Josh Kelly, who talk about the Joey switch and friendship.