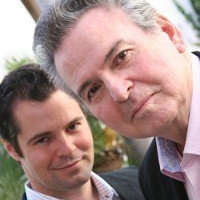 (SoapOperaNetwork.com) — After portraying the role of Alan Quartermaine on ABC's "General Hospital" for 31 years, Stuart Damon has taken to real estate as his second career move. The actor has joined his son to host the new series "Luxury Lifestyles," which takes a look into the life of luxury in the growing Southern California housing market.

Launching on Sunday, March 6 at 11:00 AM on KCOP Channel 13 in Southern California, "Luxury Lifestyles" will give viewers the opportunity to peak inside the homes of some of the grandest living spaces in the area, but unfortunately for the rest of us in the country we'll miss out on all the finest homes.

"It was intended to be a local show but there could be a national interest in this," said Christopher Damon, who was a producer on the first season of "Survivor" as well as MTV's "Road Rules" in an interview with AOL Real Estate. "You can certainly make this a national show and even an international show. I don't think it has any particular limitations. We have just been so focused on getting this first season together and getting the show launched."

"I have actually been involved with real estate development for the last 20 years," said the elder Damon when asked why he chose real estate as the next step in his life. "Now that my 31-year run with 'General Hospital' is over, I have more time to devote to it. Working in real estate with my son offers me the flexibility to continue acting when parts arise, while my son handles the business. He had been working in residential and commercial real estate for the last 10 years so this was a great opportunity."

"The show is not really about us or any listings we have or are dealing with," said the younger Damon. "The show highlights a variety of homeowners, agents, architects, and designers." But mostly, he says, it is "just about seeing amazing real estate." [Stuart adds: "We try to make the show just fun and entertaining, not too serious. Our sense of humor and sense of fun we both have with each other come in handy and it is natural to us."]

On the web: Luxury Lifestyles TV