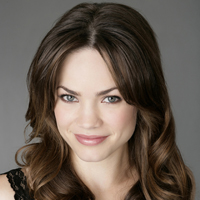 (SoapOperaNetwork.com) — After portrayer Rebecca Herbst went on maternity leave this summer, Elizabeth Webber found herself off the canvas by going cross-country to visit her sister Sarah in order to clear her head and bond with the child she shares with Nikolas Cassadine (Tyler Christopher) on ABC's "General Hospital." Now with Herbst back on set, Elizabeth better prepare herself for the drama about to unfold at work and personally.

According to sources, Herbst is set to return on the Wednesday, October 13 episode of "GH" wherein Elizabeth learns about Nikolas' involvement with Brook Lynn (Adrianne Leon) and the two discuss what they mean to each other, while at work she learns of Patrick's (Jason Thompson) affair with Lisa (Brianna Brown).

Herbst gave birth to her third child with husband Michael Saucedo (ex-Juan Santiago), Emerson Truett, on August 9, 2010. The two will celebrate their 10th wedding anniversary in June of next year.