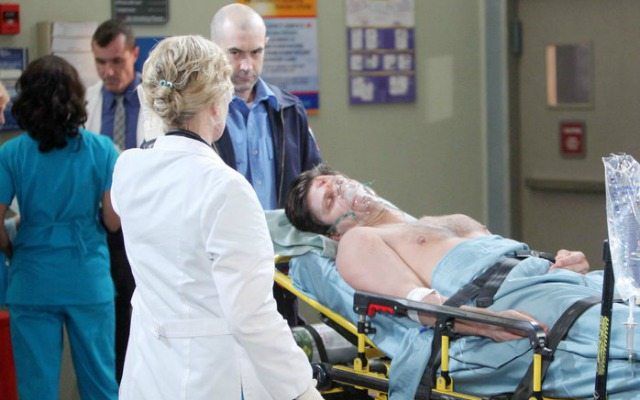 Days of our Lives Spoilers: Week of January 4 – 8

(SoapOperaNetwork.com) — A look at what’s happening on “One Life to Live” during the week of October 4, 2010.

Charlie and Viki are each surprised, albeit for different reasons, when Echo shows up at Llanfair. Viki is highly suspicious regarding Echo’s sudden return to town. On Thursday, October 7, Echo assures Charlie has coming back to Llanview has nothing whatsoever to do with Viki. However, Viki soon gets her old adversary to admit otherwise. Echo tells her that she is now a fashion photographer and wants a job at The Banner on Friday, October 8. Elsewhere in Llanview, Jessica is told that she has high blood pressure. On Wednesday, October 6, Brody informs Ford that Jessica has been placed on bed rest and wants to make that he will keep his continue to keep his distance from her. Inez tells Ford that Clint is getting his job at LU back for him. Wondering what is going on, Ford pays Clint a visit to inquire about why he wants to help him.

The Inside Story: Mind Games

Blair tells Todd that his mind is playing tricks on him when he thinks that the phone call he received was from Téa on Monday, October 4. Ross arrives to take Dani back to Tahiti only to find that she’s disappeared. John finds Greg near death after Eli injects him with a lethal drug. Shaun calls Greg’s cell phone only to learn of his brother’s condition. Darren comforts Destiny when she breaks down in tears. On Tuesday, October 5, Brody works to take the statements of Todd, Ross, and Nate in connection with Dani’s diappearance. Afterward, Todd and Ross’ altercation nearly turns physical. Todd is surprised to learn from John that Eli is still alive. When Ross searches the docks for Dani, he encounters Eli. Meanwhile, Starr reveals to Cole that James is hiding Dani as a favor to Nate. John informs Greg’s mother Phylicia of her son’s connection to Eli. By Wednesday, October 6, James pleads with Ford not to rat him out to Brody after telling him that he is helping to hide Dani. Luckily for his little brother, Ford soon decides to keep his newfound knowledge to himself.

A Closer Look: Hide and Seek

Cole walks out on Starr when she agrees to exchange messages between Dani and Nate. Natalie stumbles upon James’ bullet necklace. Cole and Hannah kiss when he confesses that he told Starr that he has feelings for her. Marty wonders what Brody is hiding, while Brody informs Natalie that he’s been seeing Marty professionally. Blair, Kelly, and Dorian learn from Todd that Eli is very much alive. Back at the docks, Eli tells Ross that Dani will now become his bargaining chip and then shoots his brother and rolls his body into the Llantano River. On Thursday, October 7, Todd runs into Eli on the docks, where the two are involved in a standoff. Todd shoots and injuries Eli, who manages to escape. Todd then pulls Ross from the river just as Dani arrives on the scene. Starr finds a bruised and bloodied Eli waiting for her at her apartment. Cole breaks from his kiss with Hannah, realizing he is still in love with Starr. John asks Nate if he knows where Dani might be. By Friday, October 8, Dani doesn’t believe Todd when he claims that Eli was the one who shot Ross, and runs away. John then arrives on the scene and surprises Todd when he says he believes his story. Dani arrives at Starr’s apartment where Eli is waiting for her. And, as Shaun and Destiny set vigil at his bedside, Greg regains consciousness and speaks a single word.