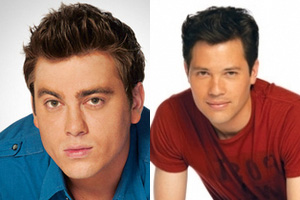 (SoapOperaNetwork.com) — As previously reported, Brandon Buddy is leaving ABC's "One Life to Live" and has already finished taping according to setside sources. Now Soap Opera Network has learned when you can last expect to see the actor in Llanview along with on-screen best friend Jason Tam, who plays Markko Rivera.

After his fate is decided by a judge on the Wednesday, November 10 episode for the murder of Eli Clarke (Matt Walton), an emotional Cole says goodbye to Starr Manning (Kristen Alderson) and their daughter Hope.

Buddy's exit concludes the four year relationship of Starr Manning and Cole Thornhart as the role will not be recast. Buddy made his acting debut on "One Life to Live" when he joined the cast of the drama series in October 2006.

Meanwhile, Jason Tam who joined "One Life to Live" in May 2007 as Markko Rivera will also mark his last day on the soap on the Wednesday, November 10 episode. Markko says his goodbyes to Langston (Brittany Underwood) and moves back to Los Angeles, California.

In addition to his role on "OLTL," the actor has also appeared on Broadway in a number of plays including "A Chorus Line," "Les Misérables," "Footloose," "Oklahoma!," and "The King and I."