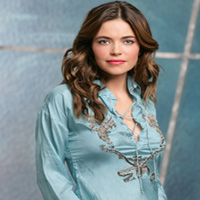 The Inside Story:Unhappy Father of the Bride
After hearing the announcement of Victoria's pregnancy, Victor is beyond furious at his daugher's actions. Nikki, not wanting Victor and Victoria's relationship to continue to crumble, she does her best to smooth things out. Unfortunately, Victor isn't interested in working things out, but does agree that he and Victoria need time to talk. When Victor learns that Billy and Victoria are engaged and plan to get married, he blows his top and blasts Billy by telling him that he's only interested in marrying his daughter in an attempt to get back at him. While Billy is greatly offended by Victor's accusation, it's Victoria that maintains her composure, despite her father's rudeness. Still peeved by Victor's comment, Billy rubs salt in the wounds by asking Victoria to marry him tomorrow. Once Victoria agrees to get married, Victor is further angry and storms out. Meanwhile, alone, Victoria and Billy start making plans to get married, but soon realize that there is a five day waiting period to get a marriage license. Determined to be married at all costs, they decide to wed in Vegas. Realizing that it's more important for her daughter to be happy, she busies herself in coming up with a way to keep the couple in Genoa City. Pulling some strings, Nikki calls Judge Anderson, a old friend, who kindly waives the waiting period to do the ceremony. In the meantime, still seething about his daughter's 'betrayal', Victor shares the news with Jack and Ashley. Jack, like Victor, is strongly against a Newman/Abbott union. Victor tells Jack that he will do whatever it takes to stop the wedding. Back at their home, the lovebirds make preparation for a wedding in their front yard. Nikki offers her help with the wedding, and ponts out to Victor she's going to stand by their daughter. After learning this, Victor is more than ready to scheme to ruin the wedding. In the meantime, Victoria asks Daniel if he'd be williing to photograph their wedding and talks to Jana about becoming her bridesmaid. Billy, on the other hand, asks Rafe Torres to be best man. As the wedding gets underway, it is obvious that Victor's absense is making it loud and clear for Victoria that he doesn't approve. Realizing that she doesn't have her father walking her down the aisle, Nicholas offers to do it. An assemble of interesting guests are there to witness the wedding; amongst being Jack, Gloria, Katherine and Abby. As Billy and Victoria are ready to get married, Victor makes his dramatic interruption of the nuptials, infuriating Nikki, and stunning all in attendance.

A Closer Look:Double-Crossed
Pushed against the wall, Ronan let's Owen know that he'll have no problem taking out Chance. Back at the Crimson Lights, Paul shows Nina the enhanced picture of what her son would look like, and she's stunned that it looks like Ronan. Meanwhile, after some serious thinking after her heated discussion with Chance, Chloe begins to worry that he's being set up to walk into a trap. Heather, on the other hand, finds herself opening up her heart to Chance when she tells him that she has feelings for him. Later that evening, Ronan and Heather run into one another and the two get into it. Realizing that he needs to do whatever he can to prevent anything from happening to Chance, Ronan pulls out all the stops to protect him. Chance, however, only has one objective in mind: clearing his name and bringing down Ronan. When the two brothers confront one another, they don't realize that they are soon placed in a web of danger. As the danger mounts, Ronan takes matters into his own hands and takes aim.