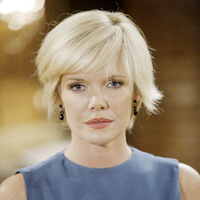 (SoapOperaNetwork.com) — While CBS.com had your first look at Maura West as the new Diane Jenkins on CBS' "The Young and the Restless," Soap Opera Network has your second and more flattering look at the actress.

As previously reported, West is joining the cast of the drama series in the role of Diane Jenkins. The role was last played by actress Susan Walters from 2001-2004, and most recently appeared earlier this year for a few episodes. Alex Donnelley originated the role in 1982. When she was last in Genoa City full-time, Diane was romantically linked to Jack Abbott (portrayed by Peter Bergman,).

In June, Maura won her second Daytime Emmy Award for Outstanding Lead Actress in a Drama Series. Backstage, the actress told Soap Opera Network that she was heading to California with her family to look for work just days after "As The World Turns" taped its last episodes. West's decision to move sure paid off quickly as she reported to work at the CBS Television City Studio, where "The Young and the Restless" is taped, on Wednesday, September 1 for a first airdate set for Friday, October 8.

West made a name for herself whens he joined "As The World Turns" in the role of Carly Tenney Snyder on April 11, 1995. After just a year with the show, the actress found herself leaving Oakdale. Thankfully fans found that her departure wouldn't last as she returned to the soap on September 10, 1997, where she remained until the show airs its last episode on Friday, September.

"The Young and the Restless" air Weekdays on CBS. Anytime on CBS.com.