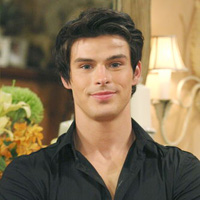 (SoapOperaNetwork.com) — In June, Drew Tyler Bell won an Emmy Award for his portrayal as Thomas Forrester on CBS' "The Bold and the Beautiful," but in August, he was fired and replaced by daytime newcomer Adam Gregory. The news was first reported by TV Guide Magazine's Michael Logan on August 17, and now Soap Opera Network has your first look at Gregory on set!

Gregory, who has appeared in a number of television series including The CW's "90210" and Disney Channel's "Wizards of Waverly Place," along with appearances in such films as "Hannah Montana: The Movie" and "17 Again," began filming on Tuesday, August 24. His first tape date also happened to be the day cast and crew were introduced to new Supervising Producer Ed Scott.

Look for Thomas in the form of Adam Gregory beginning Wednesday, September 22, when the actor shares his first scenes with on-screen daddy Ronn Moss (Ridge Forrester) and sexual chemistry with Kimberly Matula (Hope Logan). According to TV Guide, Thomas "is furious with his folks — but particularly his mother, Taylor [Hunter Tylo] — for giving his sister, Steffy [Jacqueline MacInnes Wood], all those shares of Forrester Creations and not giving him anything. This will cause the young man to become quite a force of his own and we'll see Thomas take sides with Brooke Logan [Katherine Kelly Lang] in the ongoing battle between the Logans and Forresters.."