Home / News / Anthony Geary Brings Luke Back to ‘GH,’ But Not Port Charles 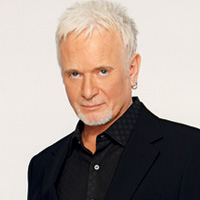 (SoapOperaNetwork.com) — Now that his quarterly vacation is over, Anthony Geary is returning to "General Hospital" next month as his character, Luke Spencer, finally crosses paths with his son Lucky (Jonathan Jackson), but Lucky is pretending to be Ronan O'Reilly. And you thought Luke was the only one with multiple personalities.

When we last saw Luke it was on Wednesday, June 30, and he had stolen money from Tracy (Jane Elliot) in a quest to make his wife miss him, and his children said their good bye's. Now months later, the question is where has Luke been and where is Tracy's money? He did steal $10 million from her after all. All questions should be answered beginning Thursday, October 7, when Luke and his priestly self turns up in Ireland and comes face to face with Lucky, who is pretending to be Ronan. With the two reunited, expect all kinds of shenanigans to ensue in typical Luke style!