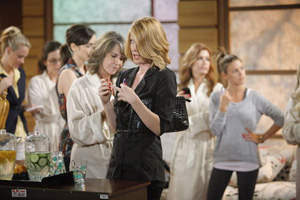 (SoapOperaNetwork.com) — On Today's episode of CBS' "The Young and the Restless," if you look for a man, you shall not find a man as the drama series is following in the footsteps of the 1936 play "The Women" by Clare Boothe Luce, in which women of all ages and sizes find themselves discussing the men in their lives and all the other juicy gossip surrounding them, but without said men in sight!

Join Sharon Newman (Sharon Case), Jill Abbott (Jess Walton), Phyllis Newman (Michelle Stafford), Heather Stevens (Eden Riegel), Chloe Mitchell (Elizabeth Hendrickson), Victoria Newman Abbott (Amelia Heinle), Lauren Fenmore (Tracey Bregman), Abby Newman (Marcy Rylan), Ashley Abbott (Eileen Davidson), and Mackenzie Browning (Clementine Ford) as they meet for an afternoon of drama, gossip, and relaxation when they find themselves away from home and away from the men in their lives. It's anyone's guess what may happen next, but be sure to be on the lookout for a fight between Sharon and Phyllis as they can throw down like no other.