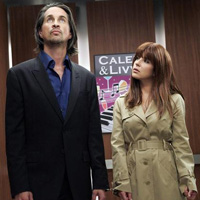 (SoapOperaNetwork.com) — "What If…" John McBain (Michael Easton) from "One Life to Live" and Sam McCall (Kelly Monaco) from "General Hospital" met in an elevator? Would they remember their past lives on ABC's "Port Charles" as Caleb Morley (Easton) or Livvie Locke/Tess Ramsey (Monaco)? Of course not, but that won't stop the ABC.com/SOAPnet.com original series from reuniting one of daytime's sexiest pairings in a whole new way. According to ABC, "After getting trapped in an elevator in a burning building, Sam and John get to know each other better than they ever thought they would." The episode begins airing next week only on ABC.com and SOAPnet.com.

"What If…" is available anytime on ABC.com and SOAPnet.com.