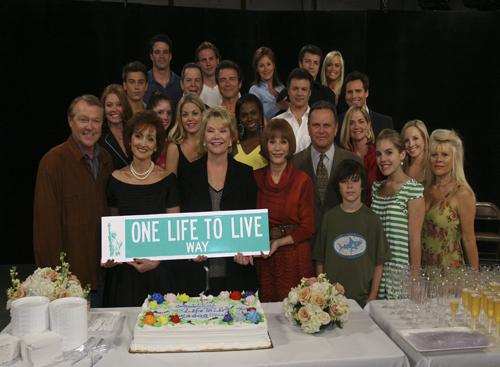 (SoapOperaNetwork.com) — “One Life to Live” celebrates 42 years of delivering drama, passion, and romance to millions of viewers.

Editors Note: I first wrote the following article in celebration of “One Life to Live’s” 39th anniversary in 2007. I am re-posting it again this year, in honor of the show’s 42nd anniversary. Only slight revisions to the original article have been made, mainly in the last paragraph, to reflect events during which occurred during the past two years, including “OLTL’s” 40th anniversary in July 2008, at which time SON posted several special articles commerating the event, as well as the show’s three day musical event from earlier this year and move to “All My Children’s” studios.

Forty-two years ago today, a new soap named “One Life to Live” debuted on ABC. On July 15, 1968, the mythical town of Llanview, Pennsylvania was born as ABC Daytime brought millions of viewers a drama centered around the culturally diverse suburb of Philadelphia. Romance, adventure, racial relations, interracial marriage, AIDS, gang violence, child abuse, split personalities, mental disorders, homosexuality, rape, heart disease, breast cancer, and more have been featured as the soap gained many loyal viewers and fans. Over the decades, “One Life to Live” has become one of Daytime television’s highest rated drama series, and many of its characters household names.

ABC approached “Another World” writer Agnes Nixon in the mid-1960s about creating a new daytime drama for the network. A short time later “One Life to Live” premiered on ABC as a half hour soap opera on Monday, July 15, 1968 at 3:30 pm et. Unlike other soaps of its day, “One Life to Live” featured a diverse cast of characters representing a number of ethnic, social and religious backgrounds. Groundbreaking storylines such as a black woman trying to pass herself off as being white proved quite relevant during the turbulence of late 1960s America. The early days of Llanview featured daytime’s first Jewish family in the Siegels, as well as the middle class Rileys and Woleks and wealthy Lords. Other families introduced over the years have included the Buchanans, Cramers, Vegas, Walshs, McBain, Vegas, and Rappaports. Since the show’s inception, the character of Victoria Lord has been the focal point of Llanview and “One Life to Live.” Originally portrayed by Gillian Spencer, Viki has been played by the legendary Erika Slezak since March 17, 1971.

“One Life to Live” has also been responsible for many “first” in Daytime television over the years. In 1970, it became the first regularly scheduled television program to adhere to a White House request to use commercial airtime to alert the American public about the dangers of drugs. The soap broadcast actual group therapy sessions of teenage drug addicts at Odyssey House in New York City. The storyline featured Dr. Jim Craig taking his daughter Cathy to Odyssey House after she stole her father’s prescription pads, and forged his signature to buy drugs to support her addiction. The idea behind the storyline belonged to none other than Agnes Nixon, who called it “a natural outgrowth of our program.”

“One Life to Live” also traveled to exotic destinations in South America and Europe over the years. The show transported viewers to the Old West, sent them to Heaven, and gave them a glimpse of life down below in the underground city of Eterna. “One Life to Live” has brought us the many marriages of Asa Buchanan and Viki Davidson, as well as numerous unforgettable characters and storylines. “One Life to Live” has also fantasized about the middle ages, amused us with special Trading Places and Babes Behind Bars episodes, and entertained us with a weeklong high school prom musical. In 2005, the sudser tackled cross promotion, when Marcie Walsh (Kathy Brier) “wrote” a book called “The Killing Club.” The book, which cracked the New York Times Bestseller list, was actually written by former “One Life to Live” Head Writer Michael Malone. The soap treated viewers to another Daytime first in 2002 with a week of live episodes, each of which featured a cameo appearance by a former cast member.

Over the years Llanview has been home to many cast members and guest stars that have gone on to become celebrities. Among them are Judith Light, Laurence Fishburne, Phylicia Rahsad, Roma Downey, Tommy Lee Jones, Marcia Cross, Ivana Trump, Dr. Ruth Westheimer, Yasmine Bleeth, Dixie Carter, Faith Ford, Ryan Phillippe, and Brandon Routh, just to name a few. “One Life to Live” has also entertained a long list of musicians over the years covering a variety of genres from country, to rap, to hip-hop, to rock and roll. The list includes Bill Anderson, Sammy Davis Jr., The Beach Boys, Peabo Bryson, Darlene Love, Little Richard, Erykah Badu, Reba McEntire, Mary J. Blige, Lifehouse, Nelly Furtado, and Snoop Dogg, among others. Other celebrity guests appearing on “One Life to Live” in recent years have been “Good Morning America Weekend” anchor Marysol Castro, talk show hosts Regis Philbin and Kelly Ripa, and author Peter Straub. And in 1994, three of the soap’s leading men, John Loprieno, Robert S. Woods, and Clint Ritchie appeared as their “One Life to Live” characters Cord, Bo, and Clint on an episode of the primetime ABC sitcom “Roseanne,” whose star is a longtime fan of the soap.

On August 17, 2007, “One Life to Live” celebrated the airing of their 10,000th episode. The milestone made “One Life to Live” only the fifth of the nine present daytime dramas to reach the coveted achievement. Furthermore, “OLTL” marked their 40th anniversary on July 15, 2008, by revisiting several classic storylines from the show’s four deacde run, including Viki’s trip to heaven, Tina’s horrific fall over the terrifying Iguazu Falls, and Bo and Rex going forty years back to time to the Buchanan ranch of 1968. The show also paid homage to creator Agnes Nixon, by inviting her to appear as herself in the special two-part anniversary episodes, in addition to bringing back several past castmembers and characters for the event. In 2010, the show moved into the vacated studios of sister soap “All My Children” when that show relocated production to Los Angeles.   Also in 2010, “One Life to Live” aired a second prom night musical event entitled “Starr X’d Lovers: The Musical” with much fanfare.

Over the past 42 years, “One Life to Live” has brought drama, passion, and romance to millions of loyal viewers five days a week, and they will continue to be rewarded for their hard work, dedication, and loyalty to the daytime genre.

”One Life to Live”, an Agnes Nixon creation, can be seen weekdays at 2:00 pm ET on the ABC Television Network. Taped in New York City, Ron Carlivati is the Head Writer and Frank Valentini the Executive Producer. For more information on “One Live to Live,” visit abc.com.

“One Life to Live” airs Weekdays on ABC. Weeknights on SOAPnet. Anytime on ABC.com and SOAPnet.com.  Check local listings.