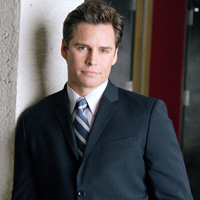 Things remain tense between Starr and Cole. Starr’s certain Hannah is lying about seeing Todd push Marty down the stairs and John begins having doubts about her as well. Although they’re at odds, Starr voices her love for Cole as he’s led back to his jail cell.

Téa’s an emotional wreck after her visit with Todd. Blair cries in Eli’s arms, deeply affected by what Tea’s facing.

Reed won’t give up on Kelly, who ultimately agrees to go on a dinner date with him.

In Santa Fe, Rex and Gigi head to the shop where his half-heart necklace was made and meet Penny, who believes her grandfather, Otto, crafted the piece. Otto might have some of the answers Rex seeks.