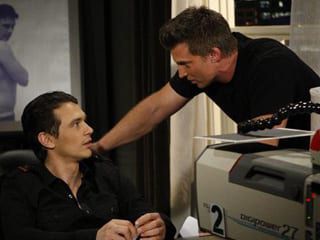 Adam’s patience wears thin when Annie continues to make everything about her. Colby overhears Annie leaving a message for Liza telling her to move forward with drawing up divorce papers just in case she needs them. JR readily goes along with Brooke’s idea of using his ordeal as the basis for an article in Tempo as he privately sees it as a way to further his plot against Annie.

While hiding at Liza’s, David learns that Damon is Tad’s son. After Tad leaves, Liza agrees to represent David and says the first thing he needs to do is turn himself in.

Erica steals Amanda out from under Greenlee during the model auditions for Greenlee’s new Fusion campaign.