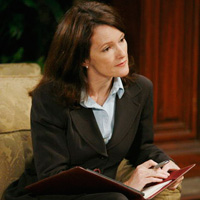 (SoapOperaNetwork.com) — If getting a father wasn’t enough, try getting a mother as well. ABC’s “General Hospital” has cast actress Lisa Waltz to portray the role of Melissa Bauer, Kiefer’s (Christian Alexander) mother starting next month on the drama series. Waltz joins Bradley Cole (ex-Jeffrey O’Neill), who we learned on Tuesday was joining the cast in the role of Carlton Bauer, Kiefer’s father. Both actors will be on recurring status with the soap. UPDATE: The soap has renamed Cole’s character to Warren Bauer according to ABC sources.

Soap Opera Network first broke the news on our Twitter page on Thursday, and we’ve since learned that the presence of the two Bauer parents is due to a major turning point in the teen abuse storyline currently playing out on the soap between Kristina Corinthos (Lexi Ainsworth) and Kiefer. According to sources, we’ll soon learn the source of Kiefer’s violent behavior with the presence of both parents on the canvas.

Prior to joining “General Hospital,” Waltz had appearances on CBS’ “The Young and the Restless” in the role of Dr. Mason, who most recently had been counseling Sharon Newman (Sharon Case) during the characters addiction phase. The actress has also appeared in numerous television series including “My So-Called Life” and “Ask Harriet.” She most recently appeared in the primetime dramas “Castle” and “Lie to Me.” She can next be seen in the film “Head Over Spurs in Love” set for release this year.