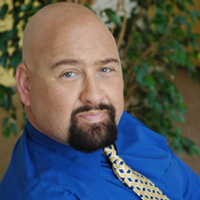 (SoapOperaNetwork.com) — How does a former pro wrestler become a sought after television and film “tough guy?”

Scott L Schwartz, best known for his role as ‘Bruiser’ in the “Ocean’s Eleven” trilogy, never intended to be an actor. Growing up, his goal was to be the best pro-wrestler that he could be possibly be; who would have known that many years later after acheiving the goal of pro-wrestler he would be seen on some of the best television shows and motion pictures in recent history.

Scott openly explains how his life plan took an interesting turn one day with one meeting. “I was wrestling in Bakersfield, California and an agent approached me after seeing me on television. He asked me if I ever considered acting to which I admitted I had not, but rather wanted to be the wrestler that achieved the ultimate goal: being carried out the arena on a stretcher, paralyzed and receiving a standing ovation.” Scott, who continued his conversation with the agent, was told that he should come to Hollywood to hear his pitch, and have a look around. During the course of the interview, Scott received his first list of agents to look at, so he could see that the agent was legitimate. Despite having some tough times in finding someone to give him his initial start, he soon caught someones interest, Suzie Moore, who Scott said “had complete faith in me.”

With wrestling only under his belt, Scott used it to his advantage – having the experience of being in front of the camera. While there were tough times for him in getting auditions, Scott didn’t give up. He was not really encouraged when he had an interview with legendary actor Robert Redford, who pointed out that actors “deal with a business that is based on deception. Sometimes you have to be a shark in a pool of sharks to get ahead.” Advice paying off, Scott eventually started getting his foot in the door and receiving acting roles as tough guys in television shows such as “Buffy the Vampire Slayer,” “Charmed” and “Angel.”

One of the most endearing tough guys has been that of ‘Bruiser’ from the film “Ocean’s Eleven.” What could it possibly be like to work with new generation ‘Rat Pack’; George Clooney, Matt Damon and Brad Pitt? “George, Brad, Matt, Andy, the whole group treated me as a part of the gang; everyone on the set were ‘family’. Not only does Scott have a fondness for the entire cast but he spoke in kind of the late actor, Bernie Mac, calling him a “truly cool guy”.

On March 30, Scott added another role to his lengthy resume: daytime soap actor, playing the role of “Amos” the bounty hunter hired by “Jeffrey Bardwell” (played by Ted Shakelford) on CBS’ “The Young and the Restless.” When asked how he was offered the role, Scott stated that his agent negotiated the three day role. Being new to daytime Scott admitted that he found “acting on a soap a new realm of acting” and when given the role of the bounty hunter he didn’t want to just focus on playing it as the typical bad guy, but rather add a touch of softness to him, “I wanted to create something that would be memorable and the director loved it” he pointed out.

Not only did he enjoy his time on set but he loved the cast he was working with. “The days I spent on the set were brilliant! Ted Shackelford was great. Everybody was so nice! Even the villians! It feels alot like a family there. Everybody is working together to make something special. It is way cool the way they have a Public Address system in your dressing room and let you know ahead of time when your scenes are coming up. Very Professional! Very Enjoyable!”

Besides acting, Scott has had the enjoyment in setting up his very own website called “The Official Site of the Ultimate Bad Guy,” but don’t let the site name fool you. The website was created as a way to give back to the friends and fans that support Scott in everything he accomplishes, even having a “Memomrium” page set up to pay tribute to many loved ones that touched his life through the years, which was created originally after the pssing of his younger sister who died of cancer.

Aside from his website, Scott also dedicates his time in becoming a big support system to various organizations that he wants to make a difference in, one being that of Children’s cancer units and the second is being a positive role model, saying “I’m very stern in terms of how to represent myself as role model for children.”

Scott not only has set a goal for himself in being the best actor that he can be, but also has his sights set on being a good director as well. Scott is Directing his first film – a short entitled “Changing Hands.” Scott points out “Actors love my shooting style. I can truly approach an actor that I am directing as a fellow actor, not just that of the director in charge. I want to show them that I have been on the same side that they have been in. I am able to give great tips on how to bring their character to the height that it should be and I use what I’ve learned as an actor as a tool to help with my directing and have my cast feel at ease”.

Scott is currently working on projects that are in post production. Fans interested in taking a look at “The Official Site of the Ultimate Bad Guy” can go to: http://www.ultimatebadguy.com.