FacebookTwitterPinterestReddItLinkedin
TumblrEmailWhatsAppViberLINE
Tuesday, May 12, 2009 1:43 AM ET | By Angela Rosa 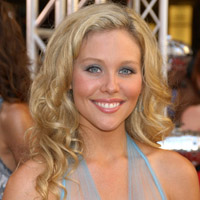 (SoapOperaNetwork.com) — Babe is back…in the spirit.

Amanda Baker is reprising the role of Babe Carey this summer on “All My Children.” The ghost of the deceased Babe will appear to the father of her son, the troubled JR Chandler (Jacob Young), and to her own tortured father, David (Vincent Irizarry).

Alexa Havins originated the role of David Hayward and Krystal Carey’s (Bobbie Eakes) daughter in the fall of 2003. Five years later, the Emmy nominated actress chose to depart the role of her own accord. Havins last “AMC” episode, on October 13, 2008, would be Amanda Baker’s first “AMC” episode. Just one year later, the character would meet a heroic death during “AMC’s” killer tornados.

Will the former Mrs. Chandler give her stamp of approval to JR’s budding relationship with her surprise twin sister, Marissa (Brittany Allen)? Stay tuned. Baker first appears as the ghost of Babe on Thursday, June 4, then reappears on Monday, June 29.