FacebookTwitterPinterestReddItLinkedin
TumblrEmailWhatsApp
Thursday, May 21, 2009 12:44 AM ET | By Scotty Gore 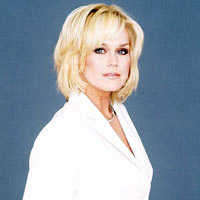 (SoapOperaNetwork.com) — Catherine Hickland returns to Llanview as Lindsay Rappaport to spice things up between Bo and Nora.

Although Lindsay hasn’t been seen being led away in handcuffs after being convicted of murdering evil doctor Spencer Truman (with the exception of Rex Balsom’s dream last October as he went under the knife to remove a bullet from his chest cavity), the firey vixen is set to return to Llanview in only a few short weeks.

Although it remains to be seen if and how the town’s token Rappaport will be granted a release from prison, reports are that she will come between Bo and Nora’s precarious relationship.  Rumors claim that Clint arranges for Lindsay to go free with hopes that she will hook up with Bo, and push Nora away from her ex-husband and into his open arms.  However, a spokesperson for “One Life to Live” had no comment.

The news comes as a suprise to many “One Life” fans who had written off the character following her murder conviction last summer.  Hickland broke the news earlier this week when the actress posted messages on her official Facebook and Twitter pages that “I’ll be returning to ‘One Life to Live’ in June! Stay tuned. :)”  A first airdate has not been set, nor has the length of Hickland’s return been announced.

Hickland, who was taken off contract with “OLTL” in 2005, also runs the highly successful make-up company Cat’s Cosmetics, and recently wrote her first book entitled The 30-Day Heartbreak Cure-A Guide for Getting Over Him and Back Out There One Month from Today.  In addition, the actress has also appeared on Brodway, and performed for audiences as a clinical hypnotist.  Hickland has been married three times, most recently to “All My Children” actor Michael E. Knight (Tad Martin); the pair are currently separated.  From 1984-89, she was married to “Baywatch” star David Hasselhoff.

Look for Hickland to return to “OLTL” sometime in June.  SON will bring you more information as it becomes available.