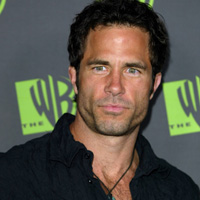 Daniel finds Philip collapsed and starts to call for an ambulance when Philip comes to and stops him. Philip insists he’s only having a bad reaction to his medication. Daniel worries it may have been another attempt on his life, but Philip convinces him that no strangers have been allowed in the house considering it’s surrounded by guards.

Philip goes to look for Stephanie and is unable to find her. He recalls their argument about getting married. Philip is suddenly worried. While hiding Stephanie in a morgue drawer, Owen calls EJ to tell him he has Stephanie, but Sami grabs EJ’s cell and knocks it out of his hand, breaking it before EJ can answer. Furious, EJ tries to repair the phone while Sami demands to know what’s going on. EJ lights into her for destroying his phone and she realizes he’s up to no good. She’s equally furious with him for putting Johnny in danger, but realizes she has no choice but to leave Johnny at the manse for his own protection.

EJ makes a dismissive comment about Grace which upsets Sami and she leaves. He finally finds another untraceable cell and calls Owen, who, fearful he’s being tracked down by the bad guys, refuses to answer. Arianna overhears Rafe ordering flowers for Sami. She doesn’t understand his attraction to her. Rafe doesn’t want to get into a discussion about Sami, and Arianna realizes he hasn’t slept with her. Rafe tells her to mind her own business, but Arianna genuinely wants to know what makes Sami different. Rafe talks briefly about his history with Sami, revealing his love for her. Arianna hopes he won’t get hurt. Rafe assures her he won’t. But later, when Rafe meets with Sami, he gets angry when Sami vents about EJ and won’t accept Rafe’s help. They start to argue which ends up with Rafe pulling her into his arms and kissing her passionately.

At Maggie’s, Will interrupts Mia and Brady, but excuses himself to give them privacy. Mia explains to Brady that she’s not an addict. She lied to Will because she didn’t want him to know the truth about her pregnancy, or cause trouble for Nicole either. Mia asks if she can tell Will the truth, but Brady asks her to keep the truth a secret for everyone’s safety. She agrees and he goes as Will returns. Conflicted, Mia tells Will that she lied to him. She hasn’t gone to any meetings since rehab. Will believes her while Mia’s continued lies eat her alive. Meanwhile, Brady leaves Nicole a message about his meeting with Mia, just as Arianna walks by and he accuses her of eavesdropping.

On the Next Days of our Lives…