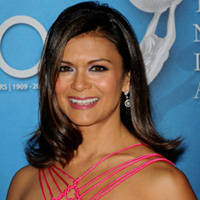 (SoapOperaNetwork.com) — As May Sweeps heats up “The Young and the Restles” goes all out.

Although she’s been dead for the last  four years, Cassie Newman is returning to “The Young and the Restless” on Wednesday, May 6 as actress Camryn Grimes reprises the role during a dream sequence that finds Sharon (Sharon Case) guided by Cassie on what life would be like for Nicholas (Joshua Morrow) and her (think ghost from Christmas past). Will Cassie lead Sharon back to Nicholas, or will Jack (Peter Bergman) be waiting in the wings to catch her fall? Tune in to find out!

As if one ghost/spirit wasn’t enough, on Tuesday, May 5, Jerry Douglas (John Abbot) is back to give life advice to son Billy Abbot (Billy Miller), who recently married Chloe (Elizabeth Hendrickson) and is in the process of rekindling his romance with old flame Mackenzie Browning (Clementine Ford).

On Monday, May 11, stylist and “Y&R” fashion blogger George Kotslopoulos appears as himself as he gives fashion advice to Chloe.

After returning to Genoa City for Katherine and Murphy’s (Michael Fairman) wedding on Friday, May 1, Trisha Cast is back as Nina Webster on Fridy, May 15 for Lily Winters and Cane Ashby’s  wedding as well. Also returning for the “Lane” wedding is former “Fresh Prince of Bel-Air” starlet Tatyana Ali as Roxanne.

Lastly, look for “Touched by an Angel” star Della Reese beginning Monday, May 18 as she joins the cast as Neil’s Aunt Virginia. The role is recurring.