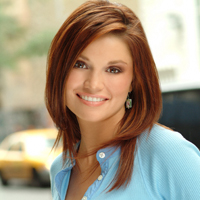 The actors will discuss their future as a real-life couple and discuss the cancellation of the soap on CBS. At least as much as CBS will let them.

On “Guiding Light,” Bruno portrays Marina Cooper who wed Bogue’s A.C. Mallet in December 2008. The two are engaged in real-life and are set to wed in the Spring of 2010. In a recent interview with CBS Soaps in Depth, Bruno stated that she is marrying the “love of [her] life.” She also noted that “one of the more special things about our relationship is that we’ve been such good friends for so long.”

Mandy Bruno joined the cast of “Guiding Light” in May 2004 and is the sixth actress to portray the role of Marina Cooper. The character debuted on the soap in 1993. Robert Bogue took over the role of A.C. Mallet in 2005. Soap veteran Mark Derwin (“Days of our Lives,” “One Life to Live” and “The Young and the Restless”) originated the role in July 1990. He left the soap in September 1993.