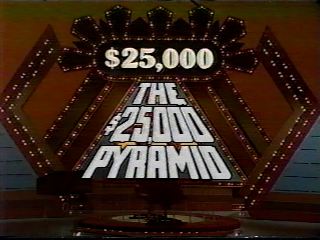 (SoapOperaNetwork.com) — Only one day after CBS announced that they were cancelling “Guiding Light,” the network provides a glimpse at what may take its place on their daytime line-up.

In an update to a story SON first brought you yesterday concerning the cancellation of “Guiding Light,” television’s longest running daytime drama, new details have emerged as to what may move into the time slot presently occupied by the iconic soap opera on the CBS schedule.

TV Week is reporting that executives at CBS are pondering replacing “GL” with a revamped version of the classic game show “The $25,000 Pyramid,” according to an Entertainment Weekly story posted on their official website early Thursday morning. While neither CBS nor Sony, the studio developing the supposed project, would comment publicly, sources familiar with the situation have told TV Week that television producer Michael Davis, best known for his behind-the-scenes work on “Who Wants to Be a Millionaire?,” has recently been working on re-launching the popular game show which was originally hosted by America’s oldest teenager Dick Clark. CBS also appears to be weighing other options, including talk shows produced in house by the network. There has also been some speculation that CBS might turn the hour over to their affiliates for local or syndicated programming. However, reports seem to indicate that the network plans to hold on to the hour soon to be vacated by “Guiding Light” in September. It is important to note that talk and game shows are much cheaper for networks and studios to produce then other daytime programming, specifically soap operas.

The “Pyramid” series of game shows has a long history on CBS, both in the daytime and prime-time, and is second only to “Jeopardy!’ in total amount of Daytime Emmy wins. Created by Bob Stewart, the game show debuted as “The $10,000 Pyramid” on March 26, 1973, and was hosted by Dick Clark. After some initial kinks and format changes, the game show paired up celebrity guests with regular, everyday Americans. An instant hit, “Pyramid” maintained its ratings even as much of the daytime genre was pre-empted by Congressional hearings on the infamous Watergate scandal involving then-President Richard Nixon. When the ratings temporarily feel in mid-1974, “Pyramid” jumped ship, leaving CBS for ABC, and soon became a fixture on the Alphabet Network’s daytime schedule. Later that same year, a syndicated prime-time version of the game show (titled “The $25,000 Pyramid”) premiered, and was hosted by the late Bill Cullen. It lasted for several years before being cancelled in September 1979. As for the ABC version, “Pyramid” rose in the ratings, and soon became the third highest rated game show at the time. After upping the cash prize in January 1976, the show was re-christened “The $20,000 Pyramid.” For five weeks in 1979, the show was again renamed, this time becoming “Junior Partner Pyramid,” as celebrity guests were replaced with children teaming up with a parent or other adult relative. However, ratings soon became to fall, resulting in cancellation once again in 1980.

Like a phoenix rising from the ashes, however, a new syndicated incarnation of the game show premiered in 1981 as “The $50,000 Pyramid,” with Dick Clark again as host. After being cancelled later the same year, “The $25,000 Pyramid” was resurrected by CBS Daytime in 1982. The word “New” was added to the title from 1982 until 1985, to help viewers distinguish it from reruns of the 1974 prime-time version hosted by Bill Cullen. The success of that version led to new nightly syndicated version, called “The $100,000 Pyramid,” which was also hosted by Dick Clark. Ratings for the daytime version again declined, and CBS cancelled “Pyramid” for a second time on December 31, 1987; however it would briefly be revived for thirteen weeks the spring of 1988, following the failure of the short-lived game show “Blackout.” This daytime version of “Pyramid” ended on July 1st, 1988, while the syndicated prime-time version lasted until September 2nd. Left in reruns for three years, the popular game show returned for a few months in 1991 as the John Davidson emceed “$10,000 Pyramid.” The latest version lasted from 2002-2004, and was simply called “Pyramid.” It was hosted by Donny Osmond, and ran in first-run syndication. In recent years, reruns of several of the various “Pyramid” series have aired on “GSN” (formerly “Game Show Network”).

If picked up by CBS, the latest version would mark the ninth installment of the long running game show, which ran for more than 1,800 episodes during its reign. The news that CBS is contemplating replacing “Guiding Light” with a revamped version of “Pyramid” has been met with resistance and anger by many “GL” fans who have jammed message boards, circulated petitions, and threatened to boycott the network in an attempt to save their show. No doubt the memories will turn bittersweet when “Guiding Light” airs its final episode on September 18th and fades into television history.

SON will continue to follow this story as it develops.